MU vigil to mark 16 Days of Action Against Gender Based Violence. 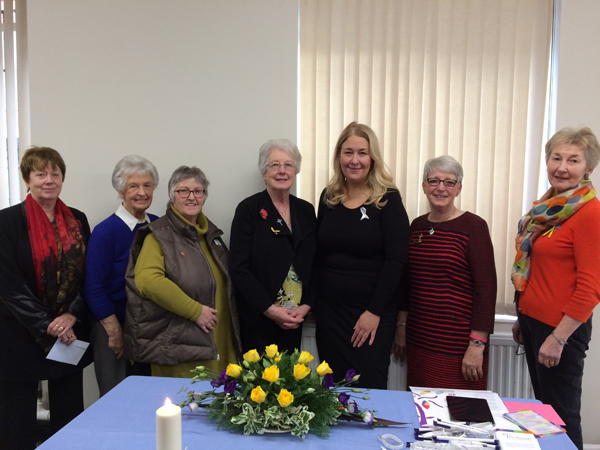 Connor Diocese Mothers’ Union has held a vigil as part of the MU’s 16 Days of Action Against Gender Based Violence.

The vigil took place in Mid Belfast area, and was hosted by the Belfast Cathedral branch. Members from other branches and the Diocesan Trustees attended.

They were welcomed by the Area Chairman Alberta Miskimmon, who explained about the Mothers’ Union campaign and the various forms this kind of violence can take.

The guest speaker was Karen Douglas from The Rowan Sexual Assault Referral Centre (SARC) which is located in the grounds of Antrim Hospital. This is a one stop centre which will deliver a comprehensive and coordinated inter-agency response to all victims of sexual assault and rape, irrespective of their age, gender, sexual identity/orientation, ethnicity, or geographical location. 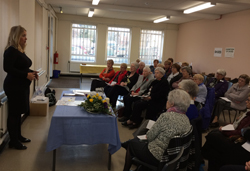 Karen Douglas from The Rowan SARC speaks at the vigil.

Mrs Valerie Ash, Connor Diocesan President, said: “Karen opened our eyes to the extent of this kind of violence and to how much support can be offered to victims. Hopefully members will pass on this information to others.”

“This was Edinburgh’s contribution to the campaign against gender violence,” Valerie said. “It was an exhibition of about 40 pairs of shoes, each with a caption which really enabled me to feel as if I was in the shoes of the victims. A very powerful exhibition which is taken round prisons and schools etc to raise awareness of sexual violence.”

Valerie thanked Geraldine Montgomery who expanded this idea into an exhibition for the vigil in Mid Belfast. “The members found it very emotional and thought-provoking,” Valerie said. “The shoes and the captions said so much more that a talk would. This could be a great idea for other branches to follow.”

The meeting concluded with the Vigil service provided by All Ireland. Each branch from the area was included in the service.

Valerie said: “The vigil was a wonderful event, well attended, and members were informed of the Mothers’ Union Campaign 16 Days of Action Against Gender Based Violence and gained an insight into one aspect of this violence.

“Perhaps one of the best things branch members can do for this campaign is to inform themselves and then inform others.” 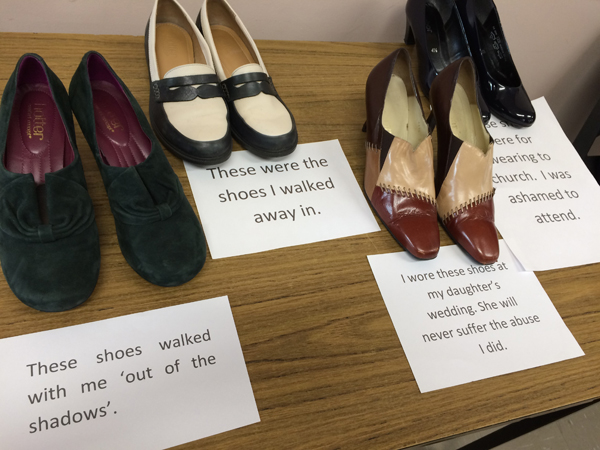 ‘These were the shoes I wore when…’ Seeing the shoes with their captions really helped us imagine the people who had worn these shoes and made their suffering very real, without a single word being spoken –
Valerie Ash