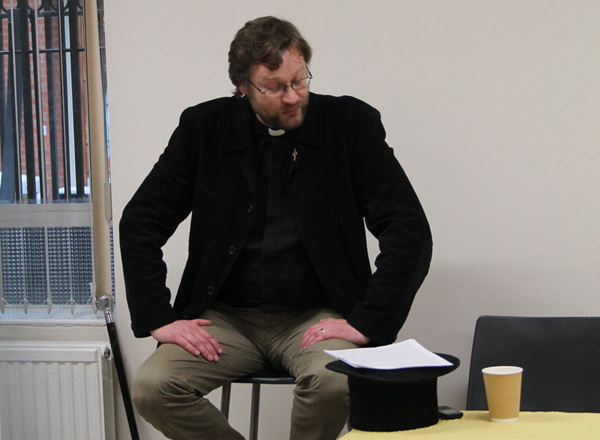 The Rev Canon Mark Niblock delivers his talk on ‘A Day in the Life of an Undertaker’ at Belfast Cathedral.

The Rev Canon Mark Niblock, Dean’s Vicar at St Anne’s Cathedral, had his audience ‘dying with laughter’ when he delivered a talk entitled ‘A Day in the Life of an Undertaker!’ on December 6.

The Rev Canon demonstrated his great public speaking ability and wicked sense of humour when he took a light look at a profession which he admitted being drawn to even as a child.

Mark was delivering the fourth and final talk in Belfast Cathedral’s Autumn Talks’ series. He told the audience that the transition from undertaker to clergyman had been a natural one.

Amidst the humour, there were also glimpses of both the sadness and of the special family moments an undertaker, and indeed a member of the clergy, has the privilege to witness and be part of.

Prior to ordination Mark worked for James Brown and Sons Funeral Directors from 1999 to 2006.

The Autumn Talks are sponsored by Arthur J Gallagher and Investec.