‘Brutal’ conditions as Ken takes on his second Everest Marathon 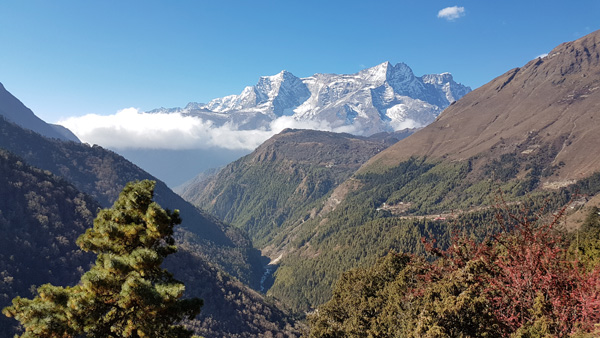 Stunning scenery during Ken Tate’s walk to the foot of Everest for the start of the Everest Marathon.

Sexton Ken Tate returned to the Himalayas to take on the challenge of a second Everest Marathon last month and in doing so raised hundreds of pounds for people in need in Nepal.

It was a mammoth challenge for Ken, who at 65 was close to the upper age limit allowed for participants. 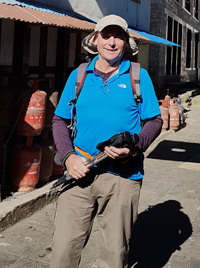 Ken in one of the towns in Nepal as he prepares to trek to Everest Base Camp.

He had said from the outset that the key factor in a successful race was getting to the start line in good health. And much to Ken’s disappointment a stomach bug in the days leading up to the race meant he was weakened and dehydrated.

A veteran of many marathons and ultra races around the world, Ken refused to give up, and took his place in the line-up at the start of the race close to Everest Base Camp at 6.30am on November 27.

Ken, who works at St George’s, Belfast, said the conditions on race day were ‘brutal.’ “One of the competitors read the temperature before we started at minus 22 degrees,” he said.

Ken began running determined, despite his illness, to do what he had set out to do – complete a second Everest Marathon 10 years after he finished his first. But luck was not on his side on this occasion. Ken took a tumble five miles into the race.

Battered and bruised he carried on to a first aid post where he discovered he had ripped off one of his big toenails. At another first aid post at the 20 mile mark, nine hours after starting the race, Ken was told by doctors that he had to retire on medical grounds. It was a devastating blow. 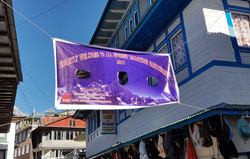 Everest Marathon runners get a heart welcome in Nepal.

The race came at the end of three week acclimatisation period which all competitors had to take part in. Ken spent a few days enjoying the sights of the Napalese capital Kathmandu before flying to Lukla Airport, described by some as the most dangerous airport in the world (don’t believe it – take a look!).

“You approach the airport down a valley with mountains looming thousands of feet on either side. The pilot has to visually find the runway, but it is the crosswinds that are the real danger,” Ken said.

Thankfully his 18 seater plane (one of the big ones apparently!) landed safely.  From Lukla, the marathon team trekked to Everest Base Camp, a challenge in itself.

“The trek in was significantly more difficult than I remember,” Ken said. “It was a lot more strenuous. What I remembered as being just a normal wee day’s walking turned into 7-8 hour hikes. I didn’t acclimatise as well as last time. 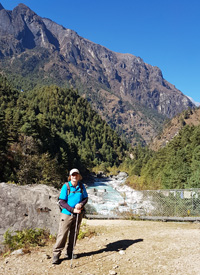 Pausing for a photo on the trek in.

“It is all about the altitude. Days are not measured in terms of kilometres or miles, but on the elevation. We trekked for 15 days. We slept mostly in tents, although there were some lodges. The area has been considerably developed since I was last there.

“But conditions are still fairly primitive. A lodge is a hut or a shed allowing you to sleep off the ground, but at night it was bitterly cold. During the day it was quite balmy with temperatures up to the mid 20s, but as soon as the sun went behind the mountains it was like opening a freezer door and standing in front of it.”

The bulk of the group’s equipment was carried by Sherpas and yaks.  The trek in was along dry tails, crossing mountain valleys, with steep descents and, inevitably, steep ascents on the other side. “The trajectory was generally upwards!” said Ken.

“Before I left I said that the essential thing was getting to the start line healthy. Unfortunately I took ill three days before the race, intestinal difficulty of almost catastrophic proportions, but there was nothing for it but to keep going.

“The big difficulty is you are trying to rehydrate, but already you are drinking five litres of water a day and then you are faced with the added burden of trying to drink even more.

“On race day I was very weak but thought that somehow or other I would be able to manage it. There really was no option. There is only one way back down unless it is a real emergency. 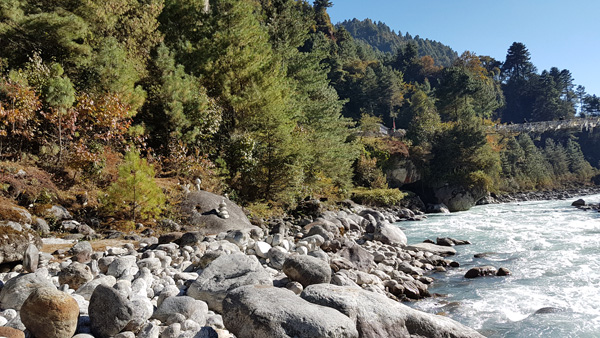 “It was bitterly, bitterly cold. I had woken at 3am to get ready and had had hardly any sleep. At 17,000 feet a lot of us were starting to suffer noticeable effects of acute mountain sickness and the only satisfactory way of dealing with that is to descend to lower altitude.”

But Ken’s situation was made worse when he fell. “I jammed one pole in between boulders and it broke, and the other snapped as I fell,” he said. “This was around 5-6 miles and I had to keep going to the next medical station. The doctor found I had ripped my big toenail entirely off my left foot. She bound it up with surgical tape and said there was nothing else she could do. It was like a battlefield injury. I was reduced to hobbling by this stage.”

Ken bravely carried on to the next medical station which was just five miles short of the finishing line, where he was told he should not continue.

“It was quite dispiriting, but had I gone against medical advice I would have been disqualified anyway,” he said. “If I had chosen to go on it would also have been putting other team members in danger. A couple of lads from the South of Ireland found another competitor lying in a bush semi-conscious. They got him back on his feet and helped him over the finish line.”

He said this had been one of the most gruelling of the 17 Everest Marathons run since the race began in 1987. “The attrition rate was probably more than 10 per cent. I expected it to be less than five per cent. Conditions on the day were absolutely brutal and that was the undoing of a number of people. Of course there were others who just breezed through it,” he said.

“I would have been better if I had been ill the previous week, rather than in the days before the race. I could not take on enough liquids to rehydrate. I was fighting a losing battle.”

Ken found time to rest and meet the monks at the monastery in the hills during the trek in.

Ken and the other participants had a day of rest in Namche Bazaar, and most of the party then walked back to Lukla. “I was so unwell I was taken down in a helicopter along with six or eight others,” Ken said. “I was suffering from general debilitation, exhaustion, cuts and bruises, but my foot bothered me the most which is why I didn’t want to do the long walk out.”

Looking back on his experience Ken said it was much tougher than he had anticipated. “The additional years on my age were probably a significant factor, and the difficulties I had acclimatising to the altitude, but mostly it was my illness coming up to race day,” he said.

Training at sea level doesn’t help when preparing for something like this. “When you get off the plane at Lukla even the act of walking up a step leaves you breathless. I had forgotten the misery and remembered only the good!”

But Ken has returned from this Everest adventure with plenty of positive memories. “It is a beautiful country with wonderful people. On the race route there is a Buddhist Monastery and I got to spend some time there.

“It is a quite mythical region. A very different cultural experience for people coming from the west. People live their lives in a different way. There is nothing with wheels, no vehicles of any sort, everything is transported by person or yak.”

Ken describes his feelings about the race as ‘ambivalent.’ “On an intellectual level I know that it was a wonderful experience and success on the day is getting everyone down safe and sound without any major injury or loss of life. But on an ego driven level, as athletes tend to be, I am disappointed it did not go the way I wanted.” 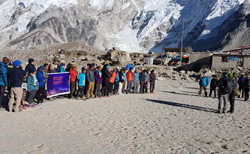 A practice line-up for the 2017 Everest Marathon – this photo was taken the day before the race at the start point close to Everest Base Camp.

He said it is taking time to adjust to being back in Northern Ireland, and he has been reflecting on what he might had done that could have made a difference to the final outcome.

Ken doesn’t quite know what he next race will be, but he has no plans to return to high altitude – at least not yet. “I don’t want to face the illness associated with Acute Mountain Sickness again,” he said, adding, with something of a twinkle in the eye “at least not before Christmas – ask me again in the New Year!”

Once his toe recovers he will be back to training, and Mexico has been suggested as a potential venue for a race – ‘somewhere at sea level with sand and seafood!’ – but Ken hasn’t committed yet.

As for Everest, well, even this latest experience has not totally deterred him. “I cannot take part in the race again [maximum age is 66 and the race is run every other year] which is fortunate as it takes it out of my hands rather than me thinking let’s have one more go…’

Ken’s efforts raised £1,000 for the Everest Marathon Fund which supports charities with a continuous development programme and work with local people at grass roots level. 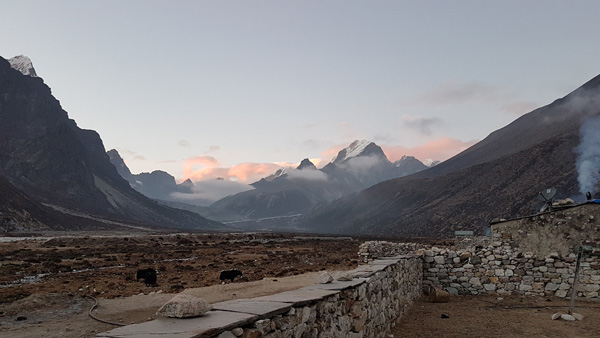 The chill sets in as the sun dips behind the majestic mountains.