Mild and dry for Black Santa Sit-out – so far! 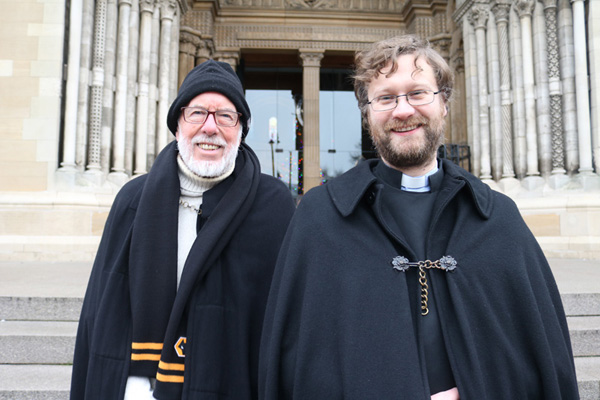 The 41st Black Santa Sit-out, launched on December 18, is well underway on the steps of St Anne’s Cathedral, and continues until around 6pm on Saturday December 23. Check out the Photo Album.

Archdeacon Forde, rector of Larne and Inver with Glynn and Raloo, will be installed as Dean on February 4. He was wearing L Plates to indicate he is a Black Santa in training.

There were many donations big and small on the first day, including a gift of £950 from the British Deer Society’s NI Branch, raised at a Gala Banquet organised in partnership with the Ulster Reform Club. 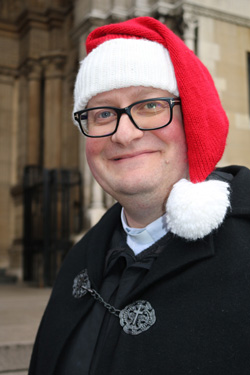 Canon Michael Parker gets into the Christmas spirit during his stint at Black Santa on Tuesday December 19.

A little bit of history was made on Tuesday when Mr Robert Kay became the first Lay Canon of St Anne’s Cathedral to take part in the Black Santa Sit-out.

Mr Kay, from Agherton Parish, Portstewart, and Mrs Myrtle Kay of Clonallon and Warrenpoint with Kilbroney Parish, were installed as the Cathedral’s first ever Lay Canons back in January.

The weather has been mild and so far dry, which has meant a steady flow of passers-by stopping to drop off money. This year’s Sit-out is unique in that there is no Dean of St Anne’s to carry the Sit-out, but the Cathedral’s dedicated Chapter and Clergy are ensuring the 41st Sit-out goes ahead as usual.

The Belfast Telegraph is running a Black Santa Diary every day this week – so pick up a copy and read the thoughts of some of those taking part on the joys, and challenges, of being part of the Black Santa team.

Entry to the Cathedral is completely FREE for the duration of the Black Santa Sit-out, so please call by, make a donation, and take a look around and don’t miss the beautiful Nativity scene.

If you can’t make it to the Cathedral, Black Santa welcomes online donations. 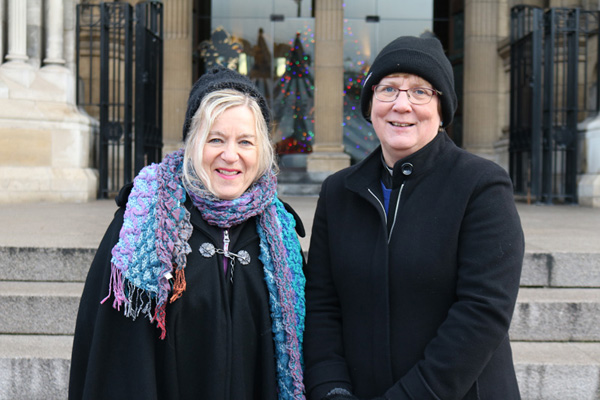 The Rev Denise Acheson, a member of the Cathedral clergy, and Methodist Ecumenical Canon, the Rev Ruth E Patterson on Black Santa duty on Wednesday morning.