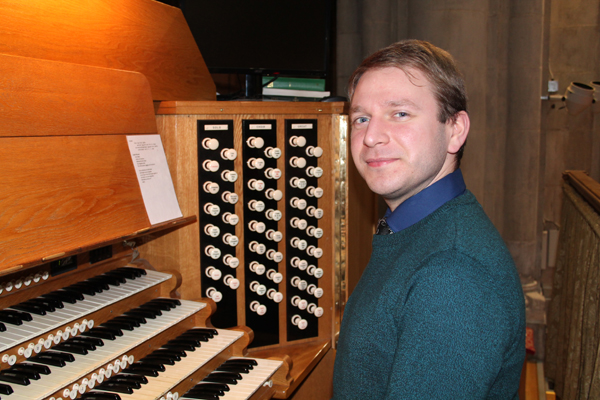 Dr Ed Jones who has taken up the new post of Assistant Organist at Belfast Cathedral.

Ed was previously Organ Scholar at Exeter Cathedral. Born and bred in Aberdeen, he began playing the organ when he was at Aberdeen University. He graduated with a Bachelor of Music degree with First Class Honours in 2011 and finished a PhD in Musical Composition at Aberdeen in 2015.

During his time as an undergraduate he was awarded the Ogston Music Making Award, the Chris Cadwur James Composition Award and he is the only music student ever to be awarded the Aberdeen City Quincentenary Prize.

He was Assistant Organist to The Cathedral Church of St Andrew in Aberdeen and in 2014 moved to Blackburn Cathedral as a full time Organ Scholar where he was involved in an outreach project in local schools.

After a year at Blackburn Ed moved to Exeter Cathedral as Organ Scholar.

As a conductor, he has worked with a wide variety of groups from the choir at St Andrew’s Cathedral in Aberdeen and Con Anima Chamber Choir, and has been musical director to fully staged operas within the University of Aberdeen.

Ed said he was very excited to be at Belfast Cathedral. “I am looking forward to working here. It is nice to come to a place where things are vibrant and busy and very much on the up. In a lot of places this is not the case in terms of choral music.”

He has been discussing plans for the future with Master of the Choristers David Stevens and Organ scholar Jack Wilson. As well as being the Cathedral’s Principal Organist – his first services are on January 7 – Ed will be responsible for the junior girls’ choir.

“I would like to establish a link with the University and would also like to set up a voluntary choir made up of students and others who cannot commit to a full schedule, and I will also be dealing with visiting choirs,” he said.

Ed succeeds Organist Ian Barber and Assistant Master of the Choristers Thérèse Woodfield who left the Cathedral at the end of 2017. His role is an amalgamation of the two.

David Stevens said: “Ed has a wide range of experience which will enable him to continue and build on the excellent work done by Ian and Thérèse, and I’m sure he’ll quickly become a valued member of the St Anne’s team.” 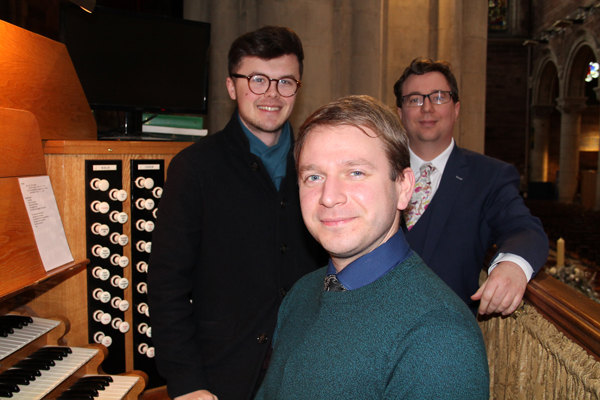