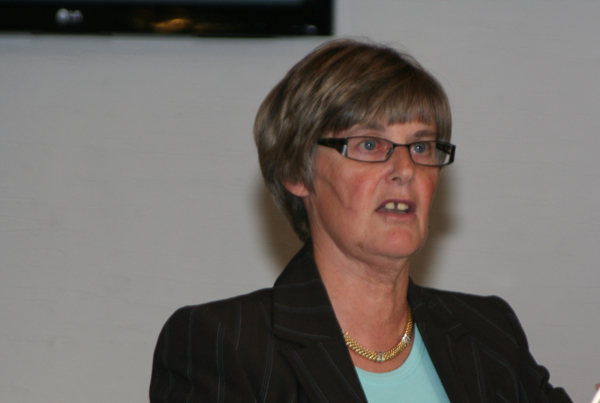 Cynthia Cherry of All Saints’ Parish, Antrim, who was awarded an MBE in the Queen’s New Years Honours for her community and fundraising work.

Congratulations to Cynthia Cherry, treasurer in Antrim Parish and a Connor Diocesan Council member, who has been awarded an MBE in the Queen’s New Year Honours.

A retired bank manager, Cynthia has raised huge sums for a variety of charities and her Award is for ‘Service to the community and charitable fundraising.’

Helping others must be something that runs in the blood – Cynthia’s uncle, the late Dean Sammy Crooks, was the founder of the Black Santa Appeal in Belfast, which has just passed its 41st year!

A native of Letterkenny, Donegal, Cynthia has lived in Antrim since 1975 and is a faithful and hard-working member of All Saints’ Parish.

Her involvement in community work started back when she was just 25 when, along with two others, she founded Antrim Junior Chamber, and she is now a lifelong member as a Senator.

She was inspired to begin fundraising following a routine mammogram at the new Antrim Hospital. “We were asked to wait in the maternity ward. Here were girls with breast cancer surrounded by posters encouraging mothers to breast feed which I did not feel was right. When I asked I was told that it would take £250,000 to provide a waiting room,” Cynthia said.

“I was in the pulpit of every church of every denomination in the Northern Board area every Sunday morning after that asking people to do something to help get the money. I also approached other organisations like the Rotary and Lions Club. In 51 weeks, with the help of many others, £55,000 was raised.

“When I went to the Board with this they asked me if I could raise another £30,000 for an ultra-sound for the breast screening unit.”

Cynthia did not want to go back to the same people asking for more money, so she decided to do something she had never done before – run a marathon! She set her sights on London 2004.

“I began training. I started with a quarter of a mile in the dark so no one could see me and I had run 628 miles in training before starting the race. In the end I raised the £30,000 and more.”

Since then she has run other marathons, completed the Edinburgh Moon Walk, completed 100 miles for Macmillan (10 miles on a Saturday supported by people from business who were sponsored to walk with her, among them Dame Mary Peters) and for 10 years organised the Antrim Walk which also raised funds for Macmillan.

Cynthia retired from the Northern Bank at the age of 50 in 2000 and began working part-time as a practice manager for Templepatrick Surgery.

She wanted to give back to the community. During the time she raised the £50,000 for the waiting room, she was also fundraising for a swimming pool for Muckamore Abbey. After her London Marathon she was able to donate £1,000 to the Lord’s Taverners, and she also raised money to provide bespoke wheelchairs for three children with disabilities.

Working at the surgery she was in a team which organised training for doctors, nurses and other staff, and through this she encountered people who needed funds to support them in their everyday life. She was asked to help buy a speciality swimming suit for a five-year-old girl who had lost both her legs and an arm due to meningitis. This suit would allow her to go swimming with the rest of her class at school. Cynthia met a well-known celebrity who donated a signed postcard to auction. This raised £1,000, enough to buy the girl two swim suits, one to wear and one for when she grew bigger.

“That wee girl is now doing her own walks for Meningitis Research and is at University. She does dressage with the Irish team and was awarded a British Empire Medal last year,” said Cynthia. “It means a lot to see how well she and others are doing.”

Cynthia always resisted tying herself to one charity. “I always said I don’t belong to any charity and if I see a need I will raise the money. I still do that.”

She has, however, been a huge supporter of Macmillan, and established the Antrim Walk to help raise £200,000 towards £500,000 that was needed for a new Macmillan unit.

Her 100 mile walk, which she did three years ago, was also for Macmillan, and the death of her sister from cancer during the course of the weeks she was doing the 10 walks made this fundraising challenge particularly poignant.

Afterwards, she decided to join Macmillan and since then has organised many activity days at Antrim Lough Shore aimed at schools and youth groups who are sponsored to take part in a range of exciting challenges.

She paid tribute to Antrim Council (now Antrim and Newtownabbey) which has supported her in practical ways in organising the Antrim Walk, her 100 miles and the activity days.

Cynthia is now very much in demand as a speaker and is willing to turn her hand to anything. “I spoke at a Tractor Run recently, and they want me to come back next year and drive a tractor!” she said.

She is currently Head of the Northern Ireland Forum of Volunteers which necessitates frequent trips to London. She is also treasurer and secretary of the Friends of Templepatrick Surgery, and in addition to her duties in Antrim Parish and on Diocesan Council she is on the Diocesan Finance Committee, the RB and the Clergy Pension Board.

Cynthia said she does not know who nominated her for the MBE.

“I am absolutely delighted. I am floating on air at the minute. As it is for community and charity I see it as an Award for the hundreds and thousands of people who have helped me. I could not have done it without that help and all the people who have subscribed to my fundraising,” she said.

Cynthia is now looking forward to a visit to Buckingham Palace – date to be confirmed!