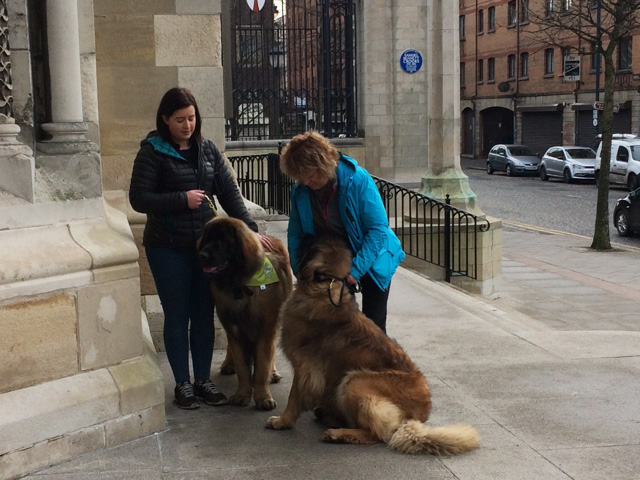 Leonbergers Conan and Nukva and their owners at Belfast Cathedral for their tour on January 14.

Belfast Cathedral was delighted to welcome a new group of regular visitors of the four legged variety when Dog Friendly Food Tours called in on January 14.

The Cathedral has been included on Dog Friendly Food Tours’ new Belfast itinerary. This is a unique walking tour of Belfast’s Cathedral Quarter, when dogs and their owners visit several dog friendly venues and enjoy some great, locally sourced food and beverages.

Company founder Jo Crossley, who started the Dog Friendly Food Tours in Portrush, brought a group to St Anne’s in December as she ran a pilot tour to see if the idea would take off in the city.

It did, and she and her group of humans and canines returned on January 14 for the first of a number of tours taking in St Anne’s and other dog friendly venues over the next few months.

Jo was inspired to include the Cathedral in her tour (despite it not being a food venue) after attending the Pets’ Service hosted by St Anne’s in October.

“It was a fab service and I loved being inside the Cathedral,” Jo said. “The walking tour takes us past the doors and I thought it would be lovely to be able to bring people who may have never been into the Cathedral before into the building.

“The trial visit was wonderful. We had seven dogs and nine humans and all the dogs behaved themselves.”

The group arrived last Sunday morning just as parishioners were having their coffee. “It was lovely to see how people reacted to the dogs. It is true that dogs bring smiles to people’s faces,” Jo said.

The visitors spend a short time in the Cathedral, but before entering Jo tells them about some of the key highlights including Lord Carson’s Tomb, the Spire of Hope and the Titanic Pall.  The dogs and their owners then have a chance to look around inside before moving on to the next stop on their tour.

Jo is a parishioner St Patrick’s Church of Ireland, Drumbeg. She previously worked in the hospitality sector in Sales, Marketing and Events roles.

“I enjoy finding out about the places I walk with my dog, and it was while out on my usual dander around Portrush that I had the ‘lightbulb’ moment of creating a ‘Dog Friendly Tour,’” she said.  “The notion of creating a food tour had hit me about a year earlier while in Fermanagh, so I put my brain into overdrive, and put all my ideas down on paper… and so the Dog Friendly Tour story began, following lots of research and meeting people.”

Jo said that no one else in the UK or Ireland runs a tour quite like this. “The response has been excellent,” she said.

For further information about the tours, visit http://dogfriendlytours.co.uk/