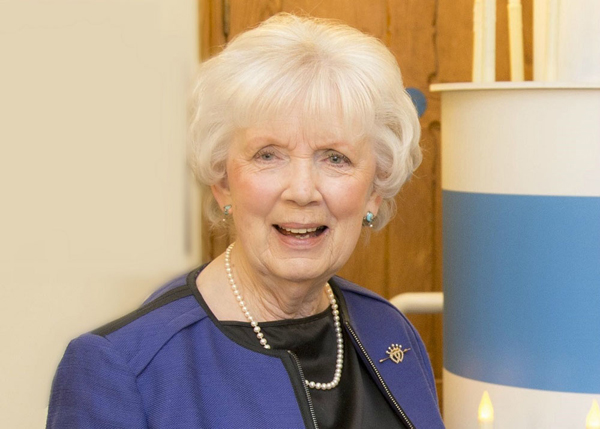 Congratulations to Mrs Joan Christie, Lord Lieutenant of Co Antrim and a parishioner of Agherton Parish Church, who received the Commander of the Victorian Order (CVO) in the recent New Year Honours.

Mrs Christie, who also has an MBE and an OBE, has been Lord Lieutenant since 2008, and has welcomed international visitors to the province, including Presidents Obama and Putin, as well as members of the Royal Family

The CVO is a private honour distributed by the Queen and Mrs Christie said she was delighted and very humbled by it.

A Lord Lieutenant is Her Majesty’s representative in the county. When a member of the Royal Family comes to Co Antrim, Mrs Christie meets them and accompanies them during their visit.

Last September she accompanied Prince Harry on his visit to Ballymena to open the town’s new £5m ambulance station.

She said: “I’m always very conscious that the Royal visitors are here to visit the people of Northern Ireland, they’re not here to see me. If they’re going to a factory for example they’re here to meet the people who work there, they’re the most important people.

“When Prince Harry came it was such a joy to see the lovely repartee that went on between him and members of the ambulance service who work on the ground.”

Mrs Christie is due to finish her role as Lord Lieutenant in June 2019 when she will be 75.

“I’ve had the most amazing nine years. I’m looking forward to the final year and a half,” she said. “Co Antrim is a great county to be the Lord Lieutenant of – you get so many opportunities with the international airport falling in this area. For example at the G8 conference I got to meet and greet President Obama, President Hollande and President Putin.”

Mrs Christie’s husband Dan died in 2008, soon after she was appointed Lord Lieutenant. “It was good to have the role to focus on at that time,” she said.

Mrs Christie, who has three grown-up children, was awarded freedom of the borough for Mid and East Antrim Council last year.

Born in Castlederg before moving to Ballybogey in the 1970s, she now lives in Bushmills.

Mrs Christie has been a parishioner at the Church of St John the Baptist, Agherton Parish, Portstewart, for the past 20 years.