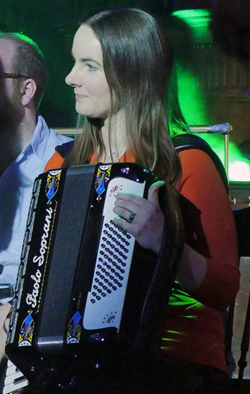 Emma Colgan took on the role of organist at St Saviour’s Parish Church, Connor, 26 years ago, when she was just 11-years-old!

And this Thursday, January 25, Emma will be demonstrating a different type of musical talent when she appears in ‘Burns an’ Mair,’ a Burns’ Night concert being broadcast on BBC2 at 9pm.

Emma plays the piano accordion in this concert presented by singer Sylvia Burnside and Waringstown man Mark Wilson, who was also the Musical Director.

She first met Mark Wilson in 2004, when they were both in the cast of ‘On Eagle’s Wing’, a powerful story of emigration, separation, love and loyalty written by award-winning Northern Irish composer John Anderson.

The stage show explores the historic story of the Scots people forced to make a new life for themselves first in Ireland and then the New World.

Emma took part in the show in the Odyssey and was also on the American tour, playing both the piano accordion and the harp.

“Since then I’ve had the pleasure of working with Mark on a few TV broadcasts. I’m always delighted when he rings as he seems to attract such talented musicians that are a pleasure to work with,” she said.

“This Burns’ Night programme is no different…it was great to play with Diane McCullough and Emma Nevin. Although we’re all from the Ballymena area we had never worked together before. I hope it’s not the last time!”

Emma has played in concerts with well-known singers including Peter Corry, and played ‘Nearer my God to me’ in a Songs of Praise Titanic commemoration with Brian Kennedy in 2012.

She is on the Senior Leadership Team at Ballyclare Secondary School as teacher in charge of curriculum and timetabling.

“Although I teach Geography and Travel and Tourism I still use my music in school – playing for the choir and leading worship at twice-weekly senior assemblies,” Emma said.

She started playing the piano at the age of six, and the piano accordion when she was 10.

She attended St Saviour’s with her parents David and Eva Culbert.  “When I was 11 our organist left to take a job in a larger parish,” Emma said.

“At the time our church was undergoing extensive restoration work and services were being held in the church hall. Having just completed my Grade 3, my Mum volunteered my services on the piano.

“The first service I played at was an evening service on the 2nd February 1992. Things went well and I was asked to continue to play until the vestry found someone for the job. Nearly 26 years later I guess they are still looking!”

Emma was selected for the Church of Ireland’s three-year Organ Scholarship Scheme under the tuition of David Drinkell and had completed this by the age of 15.

“I did enjoy the scheme and found it very useful. It was a great way of learning Church of Ireland chants and psalms and helping me to simplify them for myself. We also did some choir training,” she said.

Emma faithfully plays in St Saviour’s every Sunday, and at the Living Faith Service in St Patrick’s, Pallymena, one Sunday a month.

“My mum tells me that when I was little I wanted to do two jobs when I grew up – I wanted to be a vet and an organist! At least I am doing one of them!” she said. 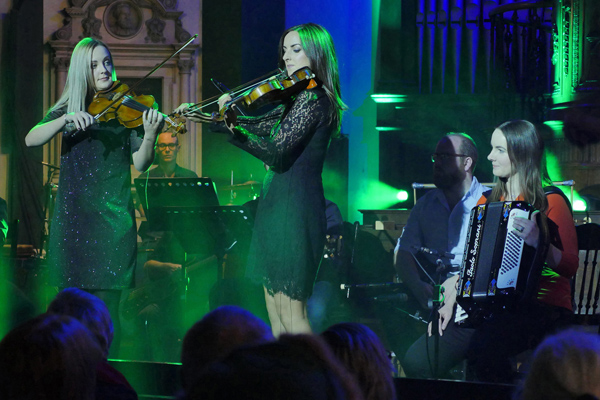