William made Reader Emeritus for years of faithful service 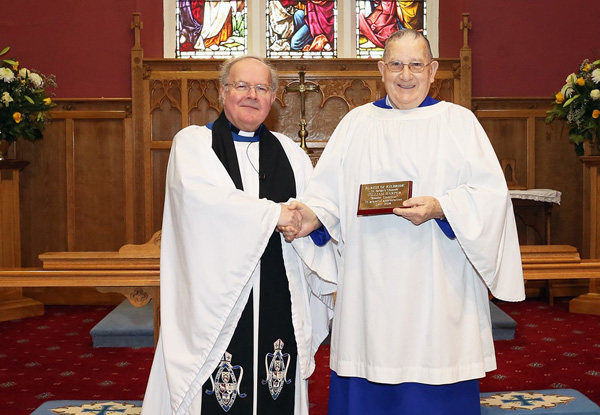 Mr William Harper receives a plaque showing he has been given the honorary title of Reader Emeritus from the rector of Kilbride, the Rev Canon David Humphries.

William has been an active member of the Church of Ireland for many years and has given exemplary service in a number of different roles.  One notable position he held until 2016 was that of Diocesan Lay Reader.  He was first commissioned as a Lay Reader on March 3 1971 in St John’s Church, Whitehouse, by the then Bishop of Connor, the Rt Rev Arthur Butler.

William has been a parishioner in St Bride’s for many years and as he stepped down from a number of duties in the church in recent times it was felt that his excellent service should be acknowledged, and in particular his former position as Lay Reader.

Although William will no longer wear the blue scarf of office, he will be able to use his new title for the rest of his life.  William continues his service to the church as a member of the choir and as a regular reader of the Gospel.