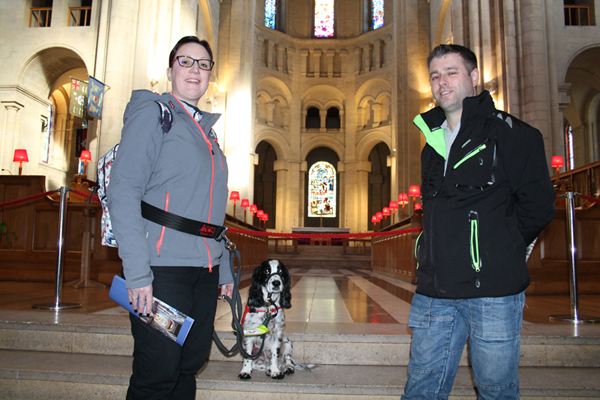 They had travelled from Hull and owed this opportunity to have a holiday to Clive’s amazing abilities to detect when Michelle is becoming ill – before she even knows herself!

Clive is a Medical Detection Dog, and he has quite literally transformed Michelle’s life. She suffers from Addison’s Disease, and Clive’s fantastic sense of smell means he can alert her to when she needs to take steroids before she even starts to feel unwell.

Clive was just a nine-month-old pup when Michelle first became sick. “We didn’t have a strong bond then,” she said. “When I came out of hospital he kept jumping at me like a magnet to my mouth. At the time I thought it was just annoying.” 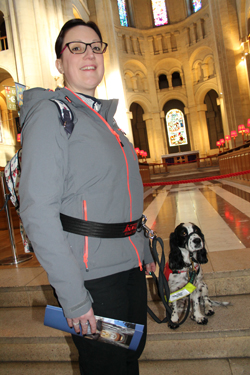 Michelle Sutherland with her life-saving pet Clive, a Medical Detection Dog, during a visit to Belfast Cathedral this week.

Michelle and Kris only learned about Medical Detection Dogs when they visited the Cruft’s Dog Show and got chatting to the charity’s Chief Executive. They learned that while many dogs are trained to support people with diabetes, only one dog in the world had been trained to work with someone with Addison’s Disease. Clive is now one of only two dogs in the UK with this training.

His ‘jumping’ at Michelle when she was ill was a sign that he could scent that her steroid levels had dropped – a full half hour before Michelle herself realised that she was becoming unwell.

Clive, now six-years-old, is now a fully trained detection dog. “He has made a massive difference to my life,” said Michelle. “We are here on holiday which could never have happened before. Without Medical Detection Dogs I don’t think I would be here now.”

And, to prove that even on holiday, life-saving dogs like Clive don’t take a break, he began jumping into Michelle’s arms just after posing for photos, prompting her to take her medicine and ensure she and Kris enjoyed the rest of their visit to the Cathedral and to Belfast.