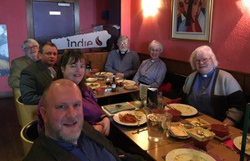 At the farewell dinner for Canon Robert Jones are, from seated round the table from front left: The Rev Trevor Johnston, the Rev Louise Stewart, the Rev Paul Jack, the Rev Raymond Moore, Canon Jones, the Rev Bobbie Moore and the Rev Elizabeth Hanna. The picture was taken by the Rev Kevin Graham.

Many of the clergy of South Belfast Rural Deanery joined the Rev Canon Robert Jones for lunch on in Stranmillis on February 22.

Canon Jones is leaving the parish of St John the Evangelist, Malone, where he has been rector for almost six years, and will be instituted as rector of the Kiltegan Group of Parishes in the Diocese of Cashel, Ferns and Ossory, on March 9.