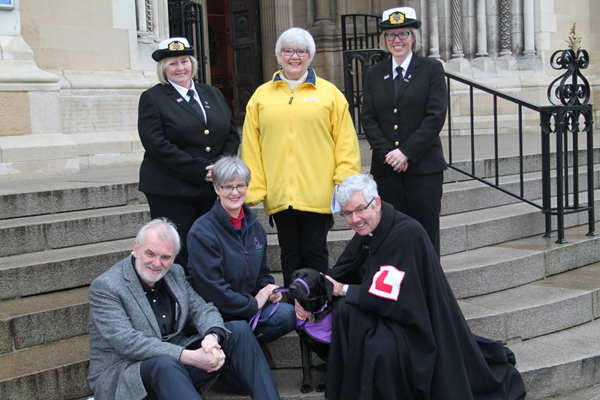 At the Good Samaritans Service at Belfast Cathedral are, back row from left: Lesley Hammond, Fishermans’ Mission; Grace Koch, SOS Bus; and Ingrid Perry, Fishermans’ Mission. Front, from left: Actor and Comedian Tim McGarry, who was special guest at the service; Penny Stanley, Assistance Dogs NI with Gracie; and the Dean of Belfast, the Very Rev Stephen Forde.

Grants totalling more than £126,000 were presented to representatives of 212 charities from across Northern Ireland who gathered at Belfast Cathedral for the annual Good Samaritans Service on Sunday March 4.

The funds were raised by the 41st annual Black Santa Sit-out last December. The cheques were handed out with a smile and an encouraging word by special guest, actor and comedian Tim McGarry, whose unique humour raised a few smiles during this very happy service.

Tim distributed grants ranging from £300 to £550, with a donation of £20,000 to Christian Aid for projects overseas. A member of the Hole in the Wall Gang, Tim is a familiar face on our television screens. A former lawyer, he is an experienced actor, writer, stand-up comedian and broadcaster who has worked extensively on TV, radio and stage. He plays Da in the popular sitcom Give My Head Peace and was the host on the Radio Ulster and BBC NI television comedy panel show, The Blame Game.

He said the gathering of charities and community organisations, and the great public support for the annual Black Santa Sit-out, were ‘testament to the spirit of the people of Northern Ireland.’ And he revealed that that he remembers Belfast’s original Black Santa, Dean Sammy Crooks, and said he and his sons visit St Anne’s every Christmas Eve to make a donation to the appeal. “It is one of those things that makes Belfast great,” he said.

Welcoming everyone at the start of the service, Dean Forde paid tribute to all the charities represented.

“In so many ways each of you acts as a Good Samaritan in your own context. You care for those who are hurt or in need. You provide guidance and the blessing of your presence,” he said.

“We give thanks for to you for giving your time, your talents and your expertise to help those in need.”

Worship was led by the Cathedral Choir under Master of the Choristers David Stephens with Assistant Organist Dr Ed Jones at the organ. A particularly poignant item was the choir’s singing of the 23rd Psalm set to music by Howard Goodall, in appreciation, Dean Forde told the congregation, of the life and talent of Emma Chambers who played Alice Tinker in the BBC programme The Vicar of Dibley, and who passed away on February 21.

The 41st Black Santa Sit-out took place on the steps of St Anne’s from December 18-23, and was unique in the history of this charitable tradition as for the first time there was no Dean in place at Christmas.

But Dean Forde, who was installed in the Cathedral on February 4, helped to launch the 2017 Sit-out and spent several hours on the steps as ‘Black Santa in training!’ He had his L plates with him at the Good Samaritans Service to remind people he was ‘still learning the ropes!’ he joked.

Dean Forde said:  “We expected giving to be down a little as there was no single ‘Black Santa,’ but with the help of our Bishops, the Cathedral Chapter, our Ecumenical, Lay and Minor Canons and our own clergy, a team of Black Santas had a constant presence on the steps of St Anne’s.

“We are very grateful for the support of individuals, groups and businesses who pledged funds both on the steps and through postal or online giving.”