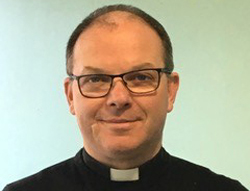 Ordained deacon in 2002 to serve his title in St Columba’s Knock, Kevin became rector of Carrowdore and Millisle in 2005. In 2008 he was appointed Area Dean of Ards Deanery and then moved to Movilla Abbey in 2009. He returned to his home diocese in 2013 when he was appointed rector of St Bartholomew’s. Kevin is also the Warden of Readers of Connor Diocese.

In his spare time Kevin is chaplain to 204 Field Hospital working with the Army Reserve whilst also completing his final year of his Master’s Degree in Practical Theology.

Kevin takes up this new role from March 11. He said: “I very much look forward to working with my colleagues in the Deanery in this new role who I have got to know well over these last years. Whist we are a very eclectic bunch of clerics we very much enjoy sharing fellowship together through worship and food!”