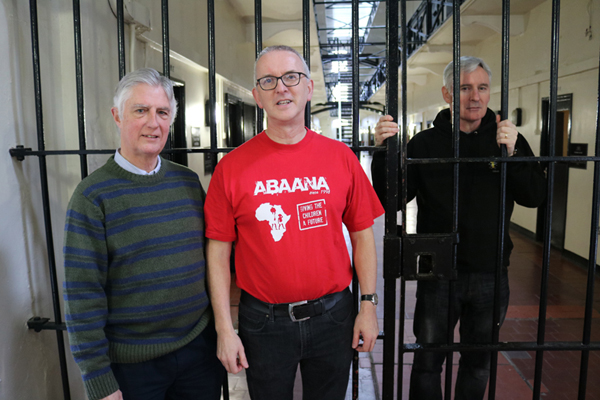 Roy Totten, left, and Abaana’s Neville Jones were released before Dean Sam Wright, who faced a solitary time until his bail conditions were also met.

We are relieved to report that the Lisburn Three – the Dean of Connor, the Very Rev Sam Wright, Roy Totten, MBE, and Neville Jones of Abaana Ministries – have all been released from Crumlin Road Gaol. 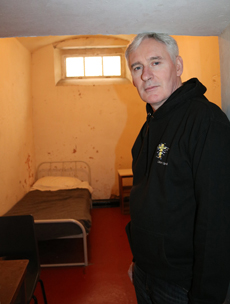 Dean Sam prepares to be locked in a cell.

They are just short of raising their combined bail target of £5,000, but with online donations open until early June, it can be presumed this shortfall will be made up and the powers-that-be were right to let the men off leniently for, of course, good conduct!

The bail dosh will now be diverted into the costs of constructing a new toilet block at the Dr Andrew McAvoy Primary School in northern Uganda. A team of young people from Lisburn Cathedral, where Sam is Dean, will be travelling to Uganda this summer.

First to be released was Roy, a parishioner of Glenavy and Board Member at Belfast Cathedral. He was followed to freedom some time later by Neville, a Lisburn Cathedral parishioner and Assistant Director of Abaana.

Dean Sam had a longer incarceration, and was spotted pacing the walls of his bare cell nervously. But his exemplary conduct, befitting a Dean of Connor, earned him the respect of his gaolers and he was finally released back into the community on the Monday evening.

His longer hair and the stubble on his chin were the only outward signs of his long imprisonment. Mentally, though, the effect of this experience on the Dean will take longer to determine! 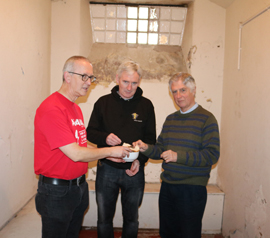 A lunch of dry bread for NEville, Dean Sam and Roy in Crumlin Road Gaol.

As well as building the much needed toilets at the Dr Andrew McAvoy Primary School, the young Lisburn Cathedral team will hold a three-day holiday bible club at the school, and work with street children in Kampala, the capital city of Uganda.

You can still sponsor Sam, Roy or Neville. Meantime, the three men have expressed gratitude to all those who believed in them and whose generosity helped FREE THE LISBURN THREE!

To learn more about Abaana, or the work the Lisburn Cathedral team will be doing in Uganda this summer, please contact Neville Jones on 07796936768 or by email neville@abaana.org.