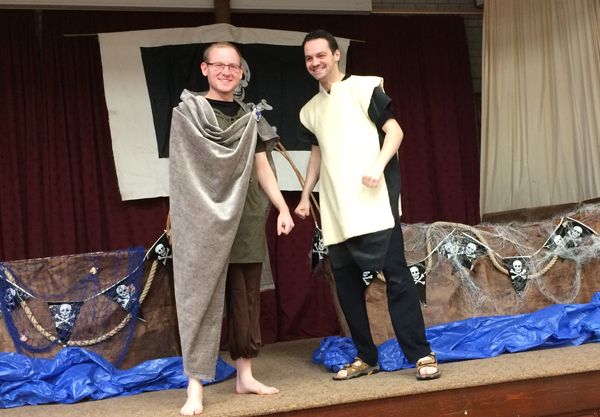 Play It By Ear actors Chris Neilands and Ross Jonas led a team retelling the mysterious adventures of St Patrick.

In each session the pupils were divided into two groups, and while group one took part in two workshops, group two was led around the interactive story trail.

Through the interactive story trail, actors brought the story of Patrick to life as the audience was led around the trail, learning about Patrick’s capture by pirates, his slavery in Ireland and his consequent escape after six long years.

The story then moved on to Patrick’s calling by God which eventually led him back to Ireland as a bishop to share the Christian faith with the Irish people.

There was fun and humour along the way as the pupils were captured alongside Patrick and put on the pirate ship to row to Ireland.

The acting cast is this year led by Ross Jonas and Chris Neilands from the Play It By Ear drama company, along with Aimee Gibson, Victoria Jackson, Andrew Neill and Stephen Whitten, members of Connor’s Children’s and Youth Councils as well as Richard Reade, Violet Lucas, Amanda Gregg and Sarah Gamble, from Broughshane Parish.

The schools took part in two competitions which they completed prior to the trip. Tuesday’s winners included Hazelbank Primary who won the ‘Design a 3D snake’ class competition for ‘Sammy,’ their amazing moveable cup snake. The pupils took away a prize of £200 for their class.

Annie from St Paul’s Primary won the ‘Design and colour a snake pattern’ competition, winning £50 for herself. There were lots runner-up prizes of Easter eggs and chocolate bunnies too!  The team welcomes four more schools on Thursday March 15.