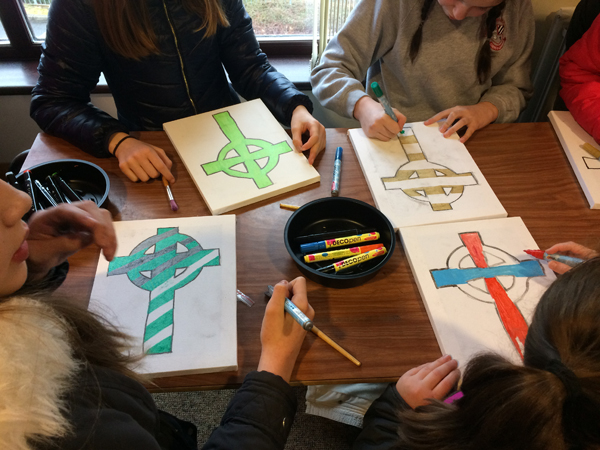 Children from four more schools took part on day two of Patrick’s Mysterious Adventure which is being hosted by St Patrick’s, Broughshane.

On the Thursday morning pupils and teachers from St Colmcille’s Primary and Carniny Primary came to experience the interactive story trail and workshops. In the afternoon, it was the turn of Ballykeel Primary and St Brigid’s Primary. Altogether we had more than 140 pupils along with their teachers attended. Visit our PHOTO ALBUM.

The story trail begins in the church hall where pupils enter the world of Patrick or ‘Maewyn Succat’ as he was known in his younger days. First of all, they meet Maewyn’s mum and dad in their Roman style villa and then catch up with Maewyn just as he is being captured by pirates and taken away to Ireland or Hibernia – the Land of Winter.

The trail continues into the church itself as Patrick escapes Ireland and makes his way back home before eventually receiving God’s call to return as a missionary to Ireland to lead the Irish people to Christ.

Connor Children’s Officer Jill Hamilton said: “Teachers commented that their pupils were enthralled throughout the story trail and were listening very well. They learned some new information about the life of Patrick to take back to school and discuss further.

“Pupils also joined in enthusiastically with the two workshops and were able to take their art work (Celtic cross on canvas) back to school with them.”

Thursday finished with competition results. The prize for second place overall in the ‘Design and colour a snake pattern’ competition was Alan from Ballykeel Primary and prize for third place overall was Chloe from St Colmcille’s Primary. They took home £30 and £20 respectively.

There were also individual school prizes of Chocolate Easter eggs and bunnies to distribute and everyone went away with a goody bag and information booklet about the trip.

The Adventure in Broughshane continued on Friday for schools and on Saturday for the general public.