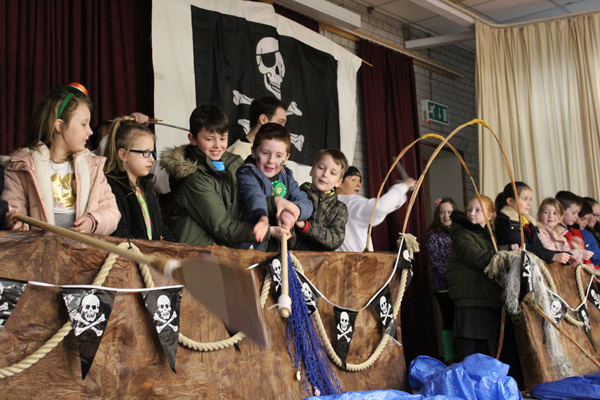 For more photos click on our Photo Gallery at the bottom of the story.

After three days enthralling local schoolchildren with the story of the life of St Patrick, Patrick’s Mysterious Adventure opened to the public on Saturday, the Saint’s special day.

More than 200 people came along to St Patrick’s, Broughshane, on St Patrick’s Day, to enjoy the interactive story trail, and children’s craft workshops.

The Adventure began on Wednesday March 14, when pupils from four schools attended to take part in two workshops – a history workshop looking at St Patrick’s life and an art workshop, where the pupils drew Celtic crosses onto canvas.

The children also followed the interactive story trail, where actors brought the story of Patrick to life depicting Patrick’s capture by pirates, his slavery in Ireland and his consequent escape after six long years.

The story moved on to Patrick’s calling by God which eventually led him back to Ireland as a bishop to share the Christian faith with the Irish people.

There was fun and humour along the way as the pupils were captured alongside Patrick and put on the pirate ship to row to Ireland.

On day two, children from four more schools took part in the workshops and story trail, and on Friday three schools came to learn more about Patrick’s adventurous life.

The acting cast was led by Ross Jonas and Chris Neilands from the Play It By Ear drama company, along with Aimee Gibson, Victoria Jackson, Andrew Neill and Stephen Whitten, members of Connor’s Children’s and Youth Councils as well as Richard Reade, Violet Lucas, Amanda Gregg and Sarah Gamble, from Broughshane Parish.

Each day there were prizes for competitions including the ‘Design and colour a snake pattern’ and the Design a 3D snake’ class competition!

“Teachers commented that their pupils were enthralled throughout the story trail and were listening very well. They learned some new information about the life of Patrick to take back to school and discuss further.”

On Saturday, when the event opened up to the public, Jumping Clay from Magherafelt showed the children how to make an amazing leprechaun keyring. The Spotty Dog Craft Studio ran a workshop where each child got their own ceramic sheep to paint and decorate in honour of Patrick’s time minding sheep on nearby Slemish Mountain.

There was a café which was much appreciated by all the parents and grandparents, and Jill expressed thanks to Cathy and her team of volunteers from St Patricks, Broughshane, who ran the café.

A highlight of the final day was Irish dancing by Sophie Lister-Tinsley from Jordan Dance School. Sophie travels around the UK and Europe taking part in Irish dancing competitions and had come third in a competition in London just the previous week. Jill said: “We were very grateful Sophie took time out of her busy schedule to perform for us.”

Jill said the team had worked closely with parishioners of St Patrick’s, Broughshane, whose enthusiasm and willingness to be involved made this a real joint venture.

“Parishioners took part in the acting, the workshops for schools, the café and the set up and take down,” Jill added: “It was brilliant to work in partnership with them and because of their help the event was a great success. A special mention must be made to Sarah Gamble who was the main organiser from the parish, and our ‘go to’ person whenever we needed help or advice. Also a huge thank you to Stuart Lloyd who led the history workshop for the schools groups and kept the children interested throughout with a lively discussion including lots of group participation.”

Jill also thanked the rector of Broughshane, the Rev Andrew Campbell and his wife Alison. “Andrew was as involved as he could be with the event, especially with the planning and sourcing funding, but his wife did just have their first child two days before we were due to start,” Jill said.

She wished Andrew, Alison and baby Henry Andrew every blessing.