The Rev David Lockhart on the move to Larne 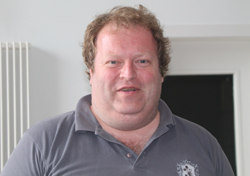 The Rev David Lockhart, rector of Cloughfern Parish, has been appointed rector of the Grouped Parishes of Larne and Inver with Glynn and Raloo.

David succeeds the Very Rev Stephen Forde who is now Dean of Belfast.

David is married to Beverley and they have three children Naomi, 14, Jonathan, 16, and Hannah, 19.

He has been rector of Cloughfern for 15 years and says he is approaching the move with mixed feelings. “You get to know the folk well over the years,” he said. “But I am looking forward to new surroundings and to getting to know people in Larne and Inver and Glynn and Raloo.”

David grew up in Shankill Parish, Lurgan, where his father Norman Lockhart, Dean of Dromore, was rector.

He studied at Queen’s University in Belfast, graduating with a BSc in Chemistry, and it was during his student days that he felt a calling to ministry.

“I was very involved in the Church of Ireland Centre at Queen’s,” David said. “I first crossed paths with Stephen Forde when he became chaplain at Queen’s when I was a warden in a Church of Ireland house at the university. Stephen was a curate in St Mary’s, Crumlin Road, where I did my first curacy and now I am following him to Larne.”

After graduating David went to Dublin to study theology. He will have been ordained 25 years this June. Following his curacy in St Mary’s, he spent several years as rector of St Stephen’s and St Luke’s in Belfast, before his move to Cloughfern.

He has been North Belfast Rural Dean for the last five years.

No date has yet been set for the institution.