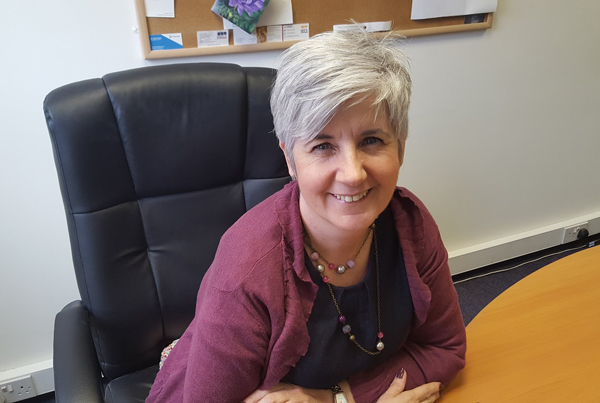 Mrs Lorraine Ogilby, PA to the Bishop of Connor.

We are delighted to introduce Mrs Lorraine Ogilby who has taken over as PA to the Bishop of Connor following the retirement of Mrs Rosemary Patterson.

A native of Newtownabbey, Lorraine, nee O’Brien, was a parishioner at the Church of the Good Shepherd, Monkstown. She attended Belfast High School and later Newtownabbey Technical College where she gained a Medical Secretary Diploma.

Lorraine married her childhood sweetheart Michael – they met on their first day at Belfast High School when they found themselves sitting beside each other as all new pupils had been seated in alphabetical order.

The couple moved to Ballyclare, and Lorraine returned to the Royal Victoria Hospital, where she worked as a medical secretary until 2002 when she took on the role of PA to the Chief Executive of the Regional Medical Physics Agency.

She remained in this job until she joined the Rt Rev Alan Abernethy and his team at Connor Diocese in March this year.

Lorraine has two sons, Jacob aged 20 and Jude aged 18. She is a parishioner of St John’s Parish Church, Ballyclare, and has been on the Select Vestry for the past 10 years. She is currently secretary, and is also a member of the parish choir and a leader of the BB Anchor Boys.

Lorraine enjoys crafts, including cross stitch, crochet and quilting, and four years ago took up running. She is a member of Seapark Athletics Club, and now runs 20-25 miles a week and competes in 10k and other races.

Lorraine said: “I am enjoying my new role because the Church of Ireland is very familiar to me. I am a cradle Anglican.

“I have been on the Select Vestry in St John’s for many years, and it is good to see how things work at the other end. My previous employment was with a big organisation and it is different to be working in a smaller team. Relationships are probably much more important.”

She added: “I am looking forward to working with Bishop Alan and his team and to meeting the clergy. I hope to bring a new insight to the job and I am very excited to be working for the Church.”