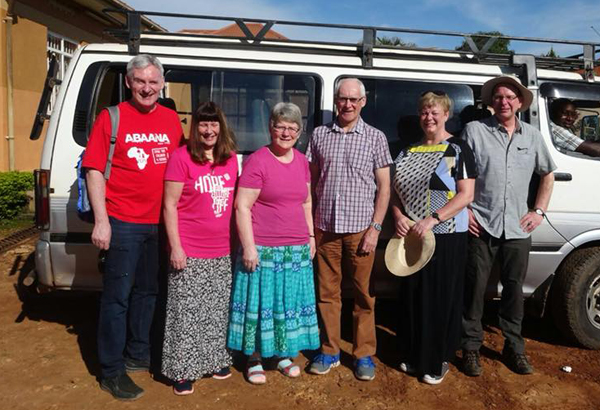 The Lisburn Cathedral team in Kampala.

A team of six from Lisburn Cathedral has safely arrived in Kampala, Uganda, for a two week mission trip with CMSI and local charity Abaana.

The team’s first week will be spent working with Abaana projects in Kampala. On Sunday members had a great day worshipping for more than two hours at All Saints’ in the city.

In a Facebook post, the team wrote: “The church was very big with a large crèche and children’s church during their many services which are filled with great joy.”

After the service the team met with the Abaana Children’s Choir which visited Lisburn early last year. The team had a great time talking with them and seeing how much they have grown. “All the children were asking after their friends in Lisburn Cathedral and said hello,” the team reported.  “The other children in the school were very excited to see us and crowded round to greet and touch our white skin!

The team has asked that people remember Derek, the young choir member sponsored by the Cathedral’s Mettle youth group, in their prayers as he sits his exams to allow him to move up to the High School.

On Tuesday, the team posted that members had visited the Heroes Street Kids in Kampala.

These are boys from the street who have given a commitment to enter into attending the classes twice a week, where they have a shower, have lessons, and get a small meal. “Our perception was that they are just wee boys, like any other boys, and the project is their ray of hope,” the team wrote.

“When they come to the room, there is a transformation from the scavenging on the streets and dumps, to a structured learning environment and clean haven twice a week for them. The children are so trusting of the haven that they opened up to us without any fear.”

The team also visited the Abaana New Life Homes project, the first place that the selected boys have their own bed and box of belongings since ending up on the street. “Whilst they are a group of boys thrown together, it is clear that they are a close set of friends who look after and care for each other!”

The team is made up of the rector, the Very Rev Sam Wright, Dean of Connor, his wife Paula, Margaret and Denis Fullerton and Jill and Martin Lester.