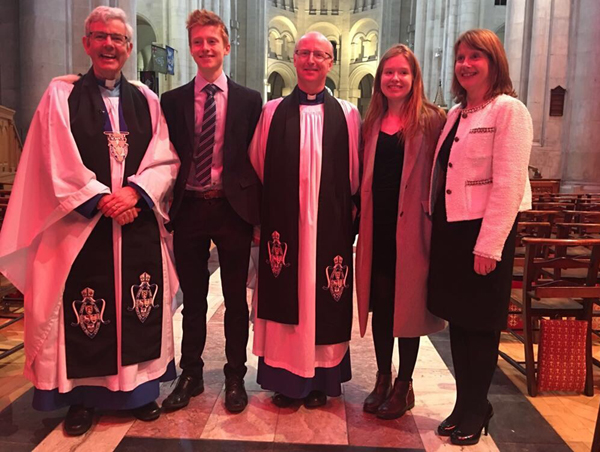 The Rev Stephen Fielding, rector of Agherton Parish, Portstewart, was installed as a Canon of Belfast Cathedral on Sunday April 15.

Family, friends and parishioners travelled from Portstewart for the service, which took the form of Choral Evensong. A number of clergy colleagues from the north coast also attended, including Father Austin McGirr, Parish Priest, Star of the Sea Parish, Agherton.

The new Canon, who until his appointment was a Minor Canon of St Anne’s, was installed by the Dean, the Very Rev Stephen Forde – the new Dean’s first installation service since he arrived at the Cathedral on March 4. 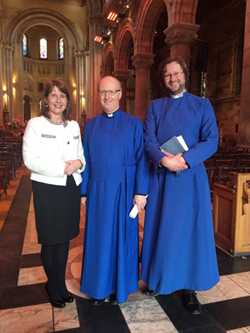 A native of Londonderry, Stephen has a degree in Economics and Geography from the University of Ulster and worked as a geological technical assistant in London before studying theology at Trinity College, Dublin.

After his ministry training he was curate in the parish of Bangor Abbey, Diocese of Down, and in 1997 he was appointed to the parishes of Templepatrick and Donegore, Diocese of Connor. He was instituted as rector of Agherton in April 2007.

Stephen’s links with Belfast Cathedral go back to the days when he was a chorister at St Columb’s Cathedral in Londonderry, and visited St Anne’s each year for the Four Choirs’ Festival, which has since been discontinued. He has been a Minor Canon since 2002.

Stephen said he was delighted to have been offered the Canonry by the Bishop of Connor, the Rt Rev Alan Abernethy. “It is lovely to have the chance to serve the Cathedral in a different way and I am looking forward to working with Dean Stephen Forde and other members of the Chapter,” he said.

Speaking after the announcement of Canon Fielding’s appointment, Dean Forde said: “For many years Stephen has been a Minor Canon in the Cathedral and has lent his voice to lead worship on many important occasions.