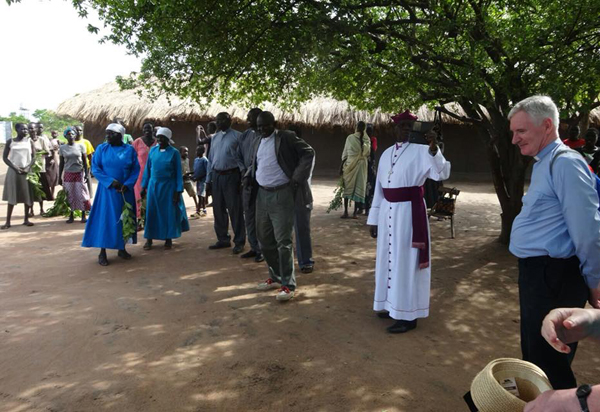 Mission team members from Lisburn Cathedral, currently in the Rhino Refugee Camp, Uganda, were warmly welcomed by Bishop Hilary and Yei Church who have been exiled there for nearly two years ago.

There have been visits to Arua by the Archbishop of Canterbury and other Anglican Church leaders, and CMSI has facilitated two visits from Ireland in the last year. The Lisburn team, however, is probably the first to go to Arua specifically to visit Bishop Hilary of Yei and his diocesan team.

The team, made up of the rector, the Very Rev Sam Wright, Dean of Connor, his wife Paula, Margaret and Denis Fullerton and Jill and Martin Lester, travelled from Entebbe to Arua on April 14. Their first week had been spent working with Abaana projects in Kampala.

Arriving in Arua, they were met by Bishop Hilary of Yei. In their latest Facebook post, the team wrote: “Bishop Hilary could not over emphasise that the church of Yei in South Sudan, and in exile in Uganda, would not be where it is without the commitment of CMS Ireland.”

Along with Bishop Hilary, the team met others who would be involved in helping them run a Clergy Retreat for Refugee Church Leaders in the camp during the week.

On Sunday April 15 they visited the OCEA Zone of the Rhino Refugee Camp. “We were welcomed by children with small branches with leaves being waved and laid on the road for around a half mile up to the church, singing ‘we welcome you Bishop / visitors with a clean heart,’” the ream reported.

Dean Sam Wright, Paula and Jill took part in the service at Unity Church with Bishop Hilary, whilst Lay Reader Denis, Margaret and Martin took part at the nearby Peace Church.

“We feel that the significance of our visit for the Yei Church in exile should in no way be underestimated. This was made clear in a letter to us from Bishop Hilary where he said that ‘While they have endured great tragedy, your visit will remind them that are not forgotten.’ A fact that is very close to the heart of the Bishop in his role.”

The team said the pivotal role that the Mothers’ Union plays in the church life in Africa was apparent, adding that their standing in the church is comparable to that of honoured visitors.

The team found their expectations of the conditions at Rhino Camp were misplaced. “Our expectation that the camp would be a tightly packed seething mass of humanity was completely wrong. There is a well ordered community of well-spaced tukals throughout the area of the overall Rhino Camp, which is spread over a number of zones within which there are districts.

“The camp as a whole is so large that we were driven for one and half hours, and were yet still only just beyond the centre. The camp has a current population of some 87,800 people – mainly women and children as the men have stayed behind to fight the war in South Sudan, or have been killed.”

But the team said this camp is still not home for the South Sudanese. “There is the uncertainty as to how long they will be there, and they do not know what they will return to when they do go back to South Sudan.

“Whilst they do have a community, it is only one that can survive on a temporary basis; long term there would need to be a better structure of schooling, farming and business.”

The team said that was not what the people wanted – their desire is to return home to South Sudan. Yet despite a perception that Yei Town may be safe, it is understood that outside of the town it is still dangerous.

Linda Abwa, Partnership co-ordinator from CMS Ireland, joined the team on Monday April 16, and the week-long residential Clergy Retreat for pastors from the South Sudan Zones of the Rhino Camp got underway, with some 24 pastors present.

The team wrote: “This is the first opportunity that these pastors have had to be able to meet together since they left South Sudan two years ago. This week will be a time for them have fellowship to support and strengthen each other.

“We heard many heart rending stories of people losing their homes, family members, their churches being burned, and having to hide in the bush for up to two years before eventually arriving at the refugee camp in Arua.”