Belfast Cathedral was packed for a Service of Choral Evensong celebrating the centenary of the Royal Air Force (RAF) on Sunday April 29. The RAF is the world’s oldest independent Air Force.

To mark this milestone, the Chief of the Air Staff, Air Chief Marshal Sir Stephen Hillier, was joined at the service by his counterpart from the Irish Air Corps, Brigadier General Sean Clancy.

The service recognised the historic links between the formation of the RAF and the formation of Ireland’s National Army Air Service, now the Irish Air Corps. Ireland made a significant contribution to the development of the Royal Air Force from the days before the First World War when the Royal Flying Corps made the first ever crossing over a stretch of water, the Irish Sea, in 1913. PHOTO GALLERY

In his words of welcome, the Dean of Belfast, the Very Rev Stephen Forde, said that the presence of both Air Chief Marshall Sir Stephen Hillier and Brigadier General Sean Clancy, was of particular significance ‘because those pioneer aviators of the RAF in the final months of the First World War included those drawn from across the whole island of Ireland, as we shall be reminded later with the reading of WB Yeats’ poem, ‘An Irish Airman foresees his death.’”

Dean Forde told guests: “While today is a day to look back with pride over 100 years of courage, daring and innovation across the history of the RAF, this is also a day to look forward with those of you who are today’s Air Cadets, and whose vision is for the RAF’s future.” 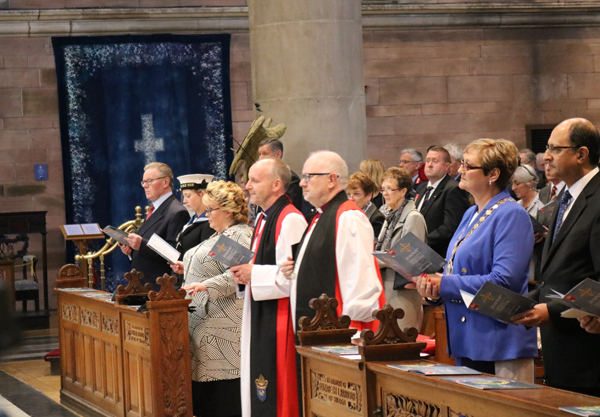 The Bishop of Connor, the Rt Rev Alan Abernethy, and the Archbishop of Armagh, the Most Rev Dr Richard Clarke, at the RAF 100 Service.

Before the service, Air Chief Marshal Hillier hosted a reception for 11 WW2 RAF veterans and descendants of former serving Airmen from across the island of Ireland at the nearby War Memorial building.

Writing in the Order of Service, Air Vice-Marshall David Niven, Air Officer Northern Ireland, stated: “The contribution by the people of Ireland to the foundation of the Service has been significant. The RAF has a long association with the City of Belfast and this Cathedral, where the standard of the first Royal Air Force Reserve Squadron – 502 (Ulster) Squadron Royal Auxiliary Air Force – was laid up in 1957.”

Following the arrival of the dignitaries, and the singing of the National Anthem and Processional Hymn, the standards were received, and these were followed by the World Ward Two veterans of the RAF.

Lessons were read by Air Chief Marshal Hillier and Brigadier General Clancy. The sermon was preached by the Rev Dr (Wg Cdr) David Richardson and the Cathedral Choir, under Master of the Choristers David Stevens, sang the Psalm ‘I will lift up mine eyes unto the hills,’ the ‘Magnificat,’ the ‘Nunc Dimittis,’ and the anthem ‘They that go down to the sea in ships.’ Assistant Organist Dr Ed Jones was at the organ.

There was also music, including a powerful Lament, from the RAF Band, and an RAF bugler played the Last Post and Reveille during a moving Act of Remembrance.

An Altar crafted from a propeller from a Handley Page V/1500 bomber; the 502 (Ulster) Squadron Royal Auxiliary Air Force Standard and a Commemorative Stone, stood at the front of the Cathedral.

Prayers were read by a Cadet, an Airman and World War Two veteran, Major DV Clarke.

The standards were returned during the singing of the final hymn, and following the service guests were invited to refreshments served in the Nave.

An RAF 100 exhibition is currently on display inside St Anne’s where it will remain until May 6. 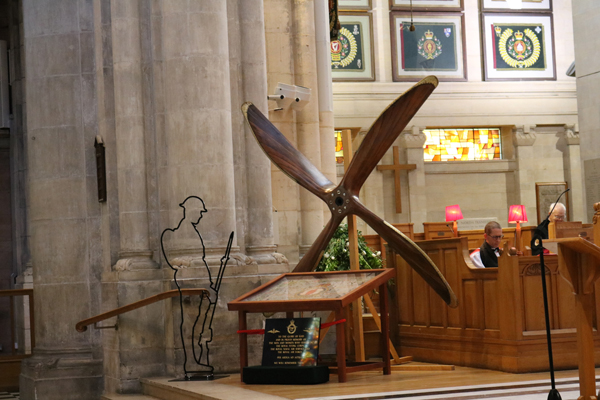 The Altar specially crafted for the RAF 100 service.