Women take time out for themselves at MU event 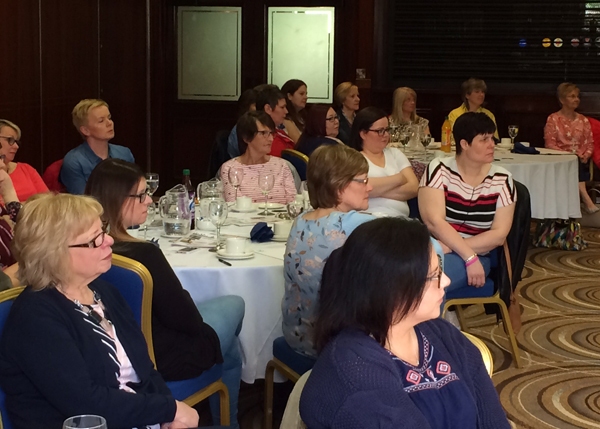 Ladies at the Health and Wellbeing event in the Dunsilly Hotel on April 28.

On Saturday April 28, almost 60 women came together in the Dunsilly Hotel, Antrim, to take time out for themselves at a Women’s Health and Wellbeing morning organised by Connor Mothers’ Union Younger Members’ Committee.

The ladies heard from four speakers, three talking about mental, physical and spiritual health and a fourth about Mothers’ Union itself.

The women were drawn from parishes all over Connor Diocese and were a mix of Mothers’ Union members and non-members. Diocesan President, Valerie Ash, opened the morning with a Bible reading, prayers and a brief introduction to her role in Mothers’ Union.  Alison Skillen, Vice President of Action and Outreach, introduced each of the speakers. 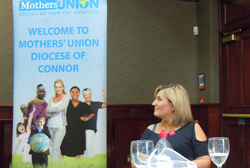 Television and radio presenter Lynda Bryans was one of the speakers at the event.

First on the programme was Lynda Bryans, former radio and television journalist, who spoke about her own mental health journey and how she had found great support not only from her family and friends but also from her faith.  She challenged those present to ask themselves: “What do you do on a regular basis to look after your mental health?”

Dr Laura Bunting, a General Practitioner in Broughshane Medical Practice, spoke about the importance of physical health and gave advice regarding screening, diet and exercise. Despite the seriousness of the topic, Laura brought her own unique humour to the talk, whilst still getting her message across.

The speaker on spiritual health  was the Rev Elizabeth Hanna, rector of St Nicholas’ Parish in Belfast.  Elizabeth spoke about the importance of prayer, reading and service for spiritual health and also of looking at ‘which step have we reached today?’ The eight steps ranged from ‘I won’t do it,’ to ‘Yes, I did it!’

The last speaker was Wendy Halligan, Mothers’ Union Young Members’ Representative for Connor Diocese, who spoke about the work of Mothers’ Union and her journey from being a ‘Reluctant M.U.M.’ (Mothers’ Union Member) to the enthusiastic member she is today.

At the end of the morning, each lady was given a ‘goodie bag’ containing literature on Mothers’ Union, health screening and some treats.  A special thank you to Antrim and Newtownabbey Borough Council for contributing packets of seeds and literature in connection with their Bee-licious campaign.

Feedback on the morning has been very favourable and Mothers’ Union in Connor has possibly gained a few new members. The event was funded by a ‘Mums in May’ grant.