Bishop Trevor Williams reflects on the work of Christian Aid 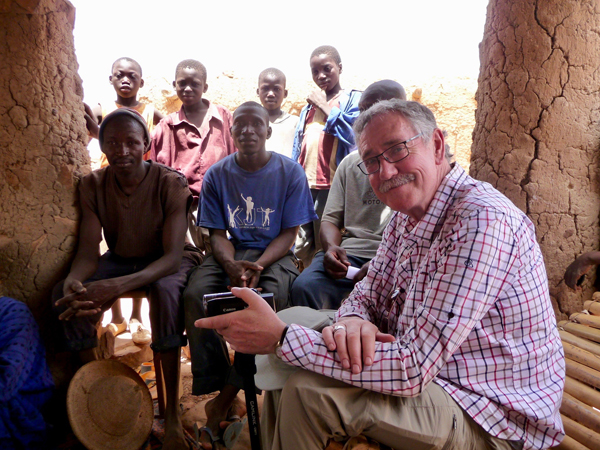 Bishop Trevor Williams during his trip to Mali with Christian Aid.

Christian Aid Week 2018 runs from May 13-19. At 11am on Sunday morning, Bishop Trevor Williams, Chair of Christian Aid Ireland, will preach in St Anne’s Cathedral, Belfast, where he is a parishioner.

Since the first charity sit-out 41 years ago, Belfast Cathedral’s Black Santa Appeal has donated more than £2.65 million to Christian Aid.

The lion’s share was given during a special sit-out which followed the Asian tsunami on Boxing Day 2004, but year-on-year Black Santa continues to support Christian Aid Ireland’s work in 24 countries around the world.

As we approach Christian Aid Week, Bishop Trevor reflects on the impact of Black Santa and the work Christian Aid does to react to crisis, tackle poverty, and encourage self-help and development in poor communities.

“As Church, one of the important things we do is to care for one another in our global family. Black Santa is the Church saying this is what we stand for, and other people saying we stand with you. I call that real mission.

“We need Black Santa today more than ever. Charities have been knocked about by the media and so I think it is important for people to be reminded that in Ireland we do care for those less fortunate than ourselves. Christian Aid Ireland and UK has transparency and accountability and we tell people where all the money goes.

“In 2015 I was invited to Mali to speak to faith leaders about their role in peace making. ISIS took over northern Mali in 2012 and the area suffered terribly. French and UN Forces were able to restore freedoms. The faith leaders were mainly Muslim Imams, but there were also Catholic Bishops and Protestant church leaders. This was the first time there had been a gathering of church leaders to talk about peace.

“When you give to Christian Aid during big appeals, you know it is long term assistance you are offering. This year the focus of Christian Aid Week is Haiti. After the earthquake in 2010 we built 700 homes for the people who had lost everything. All money donated this year will be sent to Haiti.

“The house-to-house collection has long been a hallmark of Christian Aid Week. Times have changed, but it still raises us a large amount of money.

“Exciting developments lie ahead. One of the things Christian Aid is about is addressing power balances between people in the world. Poverty is an expression of an imbalance of power, not just wealth.  We are in the process of major organisational change in our global partnerships and we will be giving away the power of decision-making and honouring the contribution of different partners.

“An example of this is that Christian Aid Ireland is separate to London, allowing us to access Irish Aid. As a result of this, Christian Aid Ireland is heading up a programme entitled ‘From Violence to Peace,’ doing important work leading Christian Aid throughout the world on that theme. The link between violence and poverty and peace and prosperity is obvious. The most impoverished nations are the most unsettled.

“Our overall strategy is seeing where we can make the greatest difference in the hope of real change. We will use local partners, accountable to the local team, empowering local people to do work in their own country with their own people.

“I saw this policy at work in Mali, when I visited the Dogon Plateau. It was sub-Saharan, 50 degree heat, lots of scrub and not much else. In the first village we reached we were shown into a mud building to discuss their problem with vulnerable soil. The winds kept blowing away the topsoil. The solution presented by our partners, the local Catholic diocese, was to build eight inch walls to stop the soil from blowing away. In the next village they had wells, irrigation planters and reservoirs to catch the rain. It was amazing development work, this area of green in the middle of the desert.

“I asked the people there what was the one thing they would say about their relationship with Christian Aid, and they said they had found peace. This is a good example of development.

“It is amazing to see the resourcefulness, intelligence, potential, the amazing gift for life that you find amongst the poorest communities. They are dignified, wonderful people but they don’t have the resources to make choices that would be good for them and their communities.  It is great to see the potential being realised through their own efforts.”

Trevor Williams is a former Bishop of Limerick and Killaloe. He was Religious Broadcasting Producer with the BBC from 1981-1988 and was leader of the Corrymeela Community from 1994-2003.