Archbishops to lead Pilgrimage of Hope to Messines 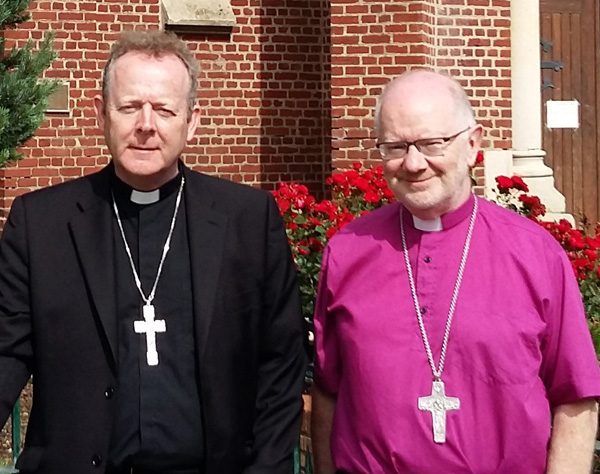 The Archbishops of Armagh are to jointly lead a Pilgrimage of Hope to Messines from May 30-June 1.

In 2016, Archbishop Richard Clarke (Church of Ireland) and Archbishop Eamon Martin (Catholic Church), led a cross-community delegation of young people from across the island of Ireland on a pilgrimage to the battle sites of the Somme.

Two years on, building on the previous pilgrimage and now marking the upcoming centenary of the end of the First World War, the Archbishops will once again lead a number of people of varying ages and backgrounds and representing the Protestant and Catholic traditions to historic and poignant sites relating to the First World War, culminating in a reflective visit to the Island of Ireland Peace Park at Messines.

The delegation of 36 people will include a core group of 16 young adults who in visiting the war sites and memorials will be able to forge friendships and share their thoughts and hopes for the future while exploring their cultural identities.

The sites on the pilgrimage will especially focus on the Battle of Messines and the arenas in which soldiers from the 16th (Irish), 10th (Irish) and 36th (Ulster) Divisions fought and died in Belgium and France and will also include the laying of a peace wreath at the Menin Gate at Ypres.

The group will also visit the city of Kortrijk; cemeteries and memorials including Thiepval Wood, Guillemont and the Ulster Tower; the Memorial Museum, Passchendaele, and Tyne Cot Cemetery.

In a joint statement, Archbishop Clarke and Archbishop Martin said: “We will have much to learn from this joint trip, and from each other in the group. It is our vision that the pilgrimage will be a witness to hope and that the visits to these important and symbolic sites in the centenary year of the end of the First World War will enable us to forge even greater friendships and work yet harder for peace together in the future.”