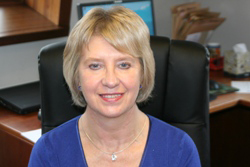 The next All Ireland President of Mothers’ Union will be Mrs June Butler MBE, former Diocesan Secretary of the dioceses of Connor and Down & Dromore.

The announcement was made at a meeting of All Ireland Trustees in Dublin on May 19, and Mrs Butler will assume the role from January 2019 for a three year term.

June said: “Mothers’ Union is a member-led organisation and I feel both humbled and privileged to have been elected by members throughout Ireland as their next President.

“For the three years beginning in January 2019 I will try my best, with God’s guidance and with support from all my talented colleagues, to lead Mothers’ Union in Ireland in a way that will encourage all our members to make a difference in their parishes and in their communities, as well as supporting projects worldwide. As ever, we will focus on the MU aims and objectives which are essentially to support family life in every context.”