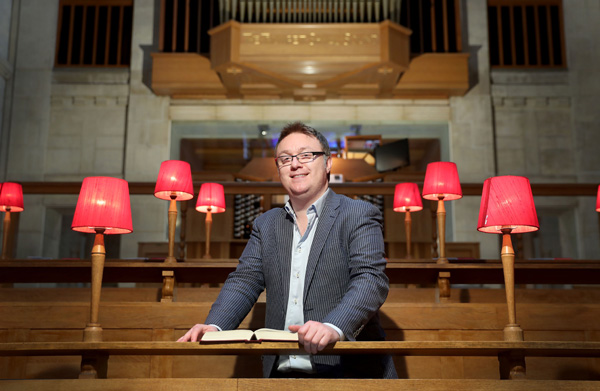 Richard Yarr, who has been Director of Music at Christ Church, Lisburn, for 25 years, is the new presenter of BBC Radio Ulster’s ‘Sounds Sacred.’

Richard, who was born in Lisburn, is an organist, musical director and classical music producer. He takes over from Noel Battye, who stepped down from behind the microphone recently after 33 years broadcasting for the BBC.

Richard has been playing the organ since he was 15, and recently celebrated 25 years as Director of Music at Christ Church Parish.

He said: “Sounds Sacred has been the soundtrack to my Sunday evenings for such a long time and I’m honoured to continue in Noel Battye’s giant footsteps. Sacred music has something to say at every junction of life – the happy, the sad and the more regular moments. I’m really looking forward to sharing my favourites and to including listeners’ requests as the show enters this new phase.”

Richard is a former Choral Scholar of King’s College, London and Chair of the Charles Wood Festival and Summer School in Armagh – Northern Ireland’s week-long festival of sacred music. He is also Producer of BBC Radio 3’s Choral Evensong strand in Northern Ireland and a judge for BBC Radio Ulster’s School Choir of the Year.

Richard’s final Sunday as Director of Music in Christ Church, Lisburn, will be June 17. The rector, the Ven Paul Dundas, Archdeacon of Dalriada, said: “I am really delighted for Richard in this appointment. It is a huge honour for him to follow in the footsteps of Canon Noel Battye and he will bring his gifts and faith to this role and bring blessings to those to who listen to Radio Ulster at 5pm on a Sunday.”