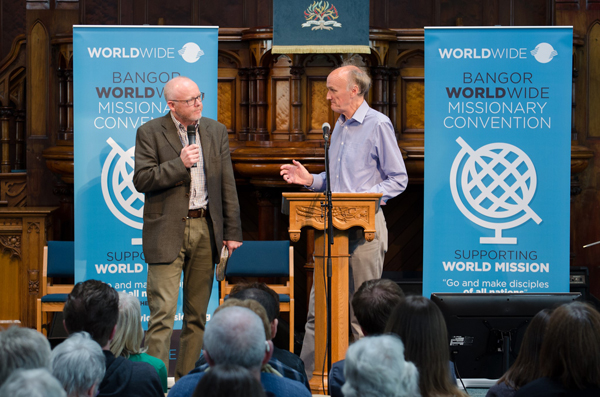 The Rev Colin Dickson, guest speaker at the launch of the 2018 Bangor Worldwide Missionary Convention, is interviewed by the Chairman, Tom Clarke.

The 82nd Bangor Worldwide Missionary Convention takes place between Friday August 24 and Saturday September 1, with the theme Pray the Lord of the Harvest.

The majority of the events will be held at Hamilton Road Presbyterian Church, Bangor, but there are also events in the neighbouring Baptist Church as well as venues in Belfast, Lurgan and Magherafelt.

Launching the programme, chairman Tom Clarke said: “We are delighted to have Alistair Begg, Senior Pastor at Parkside Church in Cleveland, Ohio, and the Bible teacher on Truth For Life, join us to lead our morning Bible studies during the Convention week in August. As a well-known author and speaker, we hope many people will join us to hear what he has to say to us through God’s Word.

“As ever, we continue to evolve our programme with a wide range of events. Our new theme, Pray the Lord of the Harvest, reflects upon the importance of prayer to the convention from the very outset in 1937 and it has always been an integral part of each year’s programme. The establishment of a weekly prayer meeting which runs throughout the year and is now reaching its 80th birthday, to support the work is another clear indication of the importance which has always been attached to the role of prayer in the convention.”

Key speakers at this summer’s convention include acid-attack survivor Pastor Umar Mulinde from Uganda, and a host of other international speakers from Spain, Dubai, Malaysia, Israel, India and Haiti.

The first main evening meeting will be held at the Spires (PCI Assembly Buildings) in Belfast on Saturday August 25 at 7.30pm. Petr Jašek from Release International, who are celebrating their 50th anniversary, will be the main speaker. The story of Amy Carmichael, as written by Etta Halliday, will also be performed and music will be led by New Irish Arts. Tickets are available online at £5 each.

A number of mission agencies will be using the Convention to celebrate anniversaries. They include SIM (Serving in Mission) and SASRA (Soldiers’ and Airmen’s Scripture Readers Association).

“Further to the success of our satellite events in Magherafelt and Lurgan last year, we will be in St Saviour’s Church, Dollingstown on Tuesday 28th, and at Union Road Presbyterian Church, Magherafelt on Thursday evening,” sid Mr Clarke.

“On behalf of the Committee, I would like to express our gratitude to Ards and North Down Council for their continued support to help promote Bangor Worldwide as far as we can.”

You will also find a Bangor Worldwide Mission Convention brochure inside the summer issue of the Connor diocesan magazine Connor Connections which will shortly be available.