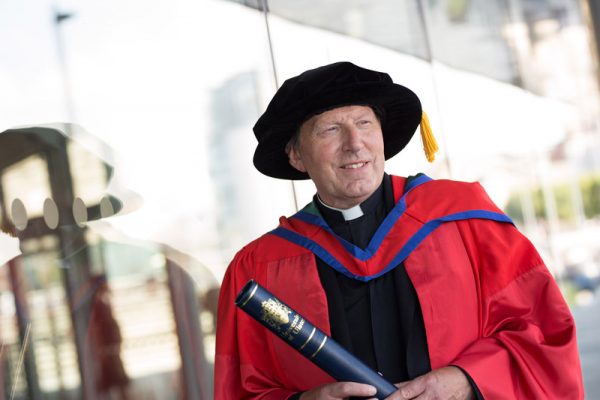 Former Dean of Belfast, The Very Rev John Mann, has received the honorary degree of Doctor of Letters (DLitt) for his civic contribution in Belfast from Ulster University. (Photo: Nigel McDowell/Ulster University)

Former Dean of Belfast, the Very Rev John Mann, said the award of Honorary Doctorate from Ulster University was a ‘surprise and a huge honour.’

John was Dean of Belfast for six years before moving to Dorset last September as team rector of the Parish of Swanage with Studland. He received his honorary degree at a ceremony in the Waterfront Hall, Belfast, on Wednesday July 4.

The former Dean, who spent most of his ministry in Connor Diocese, has been recognised for his civic contributions.

Earlier this year, John, a graduate of Queen’s University, was awarded The Lambeth Cross by the Archbishop of Canterbury for his ecumenical work in Belfast.

At the ceremony on July 4, he received the honorary degree of Doctor of Letters (DLitt).

“I never expected this,” said John. “It is a huge honour. I am particularly touched by it because the relationship between the Cathedral and the University has been so important to St Anne’s for a long time and I feel that the connections will continue to strengthen as the Belfast Campus develops.

“It is particularly important for St Anne’s with Ulster University being the civic university in the city. Ulster University is bringing a lot of tenants and staff into the area in a way that has not happened before, and that will have a big effect on the community.

“Over the last few years discussions with residents of the area, including the Cathedral, have been done sensitively and wisely.”

On Wednesday evening the former Dean was returning to the Cathedral as a guest at the University’s post-graduation dinner where he is to deliver an address – in the role of Dr Mann, not Dean Mann!

The Award Citation from the University read:

His tenure as Dean of Belfast was marked by building relationships and fostering a sense of community within the regular congregation. In 2017 he installed the first Roman Catholic priest as an ecumenical canon in addition to previously installed Presbyterian and Methodist ministers.

Under his leadership, Belfast Cathedral has become a focus for civic events and as a sacred civic space. Over the past three years, thousands have visited the Cathedral and guided tours and school visits to the Cathedral are also now regular daily features.

He also has worked tirelessly with other religious leaders in Belfast and has made a profound contribution to the civic understanding and acceptance of the concept of a Cathedral Quarter, and, has ensured that the Cathedral remains at the heart of it.

John has also raised over one million pounds for local charities, during his pre-Christmas (Black Santa) sit-out for charity. 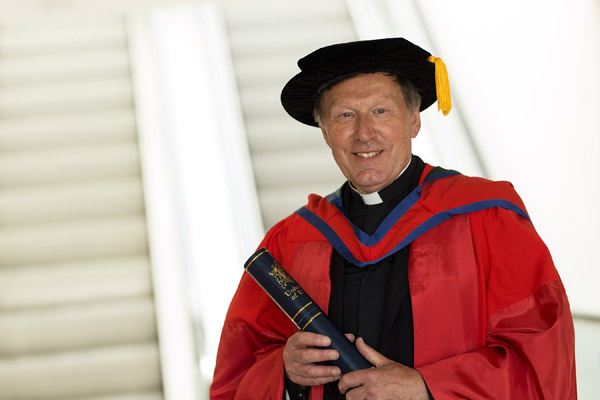 Former Dean of Belfast, The Very Rev John Mann, has received the honorary degree of Doctor of Letters (DLitt) for his civic contribution in Belfast from Ulster University. (Photo: Nigel McDowell/Ulster University)

Other names honoured by the university include Derry actress Bronagh Gallagher, superbike racing champion Jonathon Rea, and the Director General of the BBC, Tony Hall.

Commenting on the recipients of the honorary degrees, Ulster University Vice-Chancellor, Professor Paddy Nixon said: “Each year thousands of students graduate from Ulster University ready to make a positive contribution to society.  In doing so, it is important that they have role models they can look to who are making a real difference in the world around them.

“Our honorary graduates demonstrate leadership, integrity and progressive thinking, determination, talent and creativity all of which are central to the core values and character of the University.

“Those who are being honoured also represent a diverse range of sectors locally and globally in which our graduates are employed and are individuals who can only inspire our students as they begin to shape their own future paths and direction.”