A perfect day on Rathlin for visitors from Knock Parish 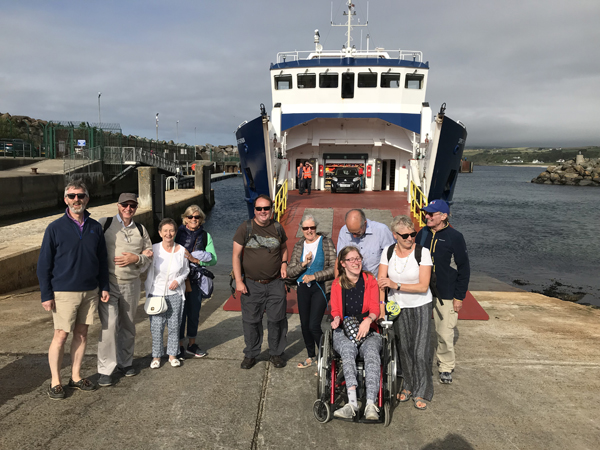 Arriving in Rathlin after the ferry ride from Ballycastle.

A group of parishioners from St Columba’s, Knock, Diocese of Down and Dromore, travelled to the northern reaches of Connor Diocese on July 1 for a parish pilgrimage to Rathlin Island.

Knock parishioner Ian Noad has provided this report of a wonderful day out, which included worship in St Thomas’ Parish Church, Rathlin. 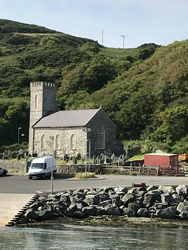 The Knock group joined parishioners from St Thomas’, Rathlin, in the picturesque church for Holy Communion.

Leaving behind a glorious blue sky in Belfast on Sunday 1st July, that would surely have lured even Van Gogh into his back garden with paintbrush and easel, a posse of some 60 parishioners from St Columba’s, young and old, plus Canon Ken’s two dogs, set sail from Ballycastle on the 10am ferry across a millpond north channel.

The itinerary had been painstakingly reconnoitred by our Organist and Choral Director, Dr Joe McKee, and Yvonne, already ensconced on the island for the weekend with Alastair and Ruth McCartney in most comfortable accommodation overlooking Church Bay.

The visit was a repeat of that undertaken by St Columba’s in August 2013, a truly trans diocesan affair between Connor and Down and Dromore, with the aim of renewing support and friendship with the parishioners of Rathlin by joining them in a service of Holy Communion in their own historic parish church of St Thomas.

Disembarking at the harbour, a large number of parishioners headed straight for the delightful coffee shop, The Watershed, where they were served coffee and delicious scones by an industrious and most willing staff in record time, before proceedings were due to commence at 11.30am.

St Thomas’ was packed to capacity, with standing room only! The service was conducted with aplomb by our Rector, Canon John Auchmuty, to whom grateful thanks must be expressed for the faultless organisation of the whole day, ably assisted by Canon Ken Smyth and Epistle reader, Andrew Ellis.

In his sermon, the Rector focused on the importance of responding to the needs of the individual in both word and deeds, whilst Dr Joe Mckee, on the digital piano, accompanied by several members of St Columba’s choir, lead the music and singing of the combined congregations in rousing style, metaphorically raising the very rafters of the roof with wonderfully appropriate hymns such as Summer Suns Are Glowing and the maritime Will Your Anchor Hold?

The spirit of communion and fellowship experienced by everyone present was matched by the warmth of welcome and friendship afforded, once again, to the happy visitors by the resident parishioners. The service concluded in a most practical manner, with Canon Ken drawing on his unrivalled local knowledge to proffer helpful tips about the many places of interest to visit on the island.

After what had been an early start to the day for many – and none earlier than the Rector and Caroline, who had duly delivered son Henry to the city airport at 5am! – lunch time soon beckoned, with parishioners producing a magnificent array of picnic offerings for consumption whilst enjoying the view across the bay, and others opting to take the island bus to the recently opened RSPB Seabird Centre for their relaxing repast.

Thereafter, parishioners fanned out to invade the island in earnest – though mercifully with considerably less murderous and shocking intent than that of earlier raiders during the turbulent 16th and 17th centuries – visiting the East, West and Rue lighthouses as well as the interesting Heritage Centre, spotting the many species of birds and seals, or just strolling along the winding roads and relaxing on the sea front.

Regretfully, the famous cave where Robert the Bruce allegedly gained inspiration by the untiring efforts of an indomitable spider could only be accessed by sea.

The afternoon provided a unique opportunity for parishioners and their families to ‘do their own thing’ on the island, whilst enjoying each other’s company with much laughter and merriment along the way. 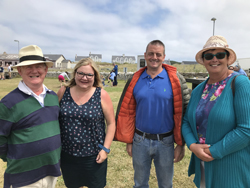 Enjoying their day out on Rathlin.

The unusual summer heat was tempered by a delightfully cool onshore breeze, perfect for walking and strolling, or just sitting and relaxing, and the island was looking at its very best, simply beautiful, in every possible direction.

In what seemed like no time at all, the 5.30pm ferry appeared and parishioners enjoyed another smooth and highly sociable crossing back to Ballycastle, where many decided to conclude the outing by sampling the famous local fish and chips. Others driving home by car who happened to tune into Radio Ulster were serenaded by the Ballylone Concert Flute Band on the programme Strike Up the Band, presented by none other than our very own Dr Joe McKee!

A perfect end to a perfect day, blessed by superb weather and thoroughly enjoyed by all from St Columba’s who participated in an abundance of friendship, joy and fellowship, whilst offering a real sense of support and purposeful outreach to the parishioners of St Thomas’ on Rathlin Island.

It cannot be too long before we are back again. 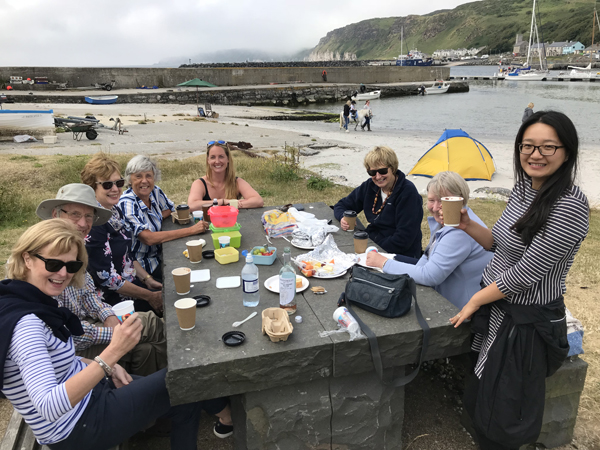 Picnic time for the Knock parishioners during their visit to Rathlin Island.