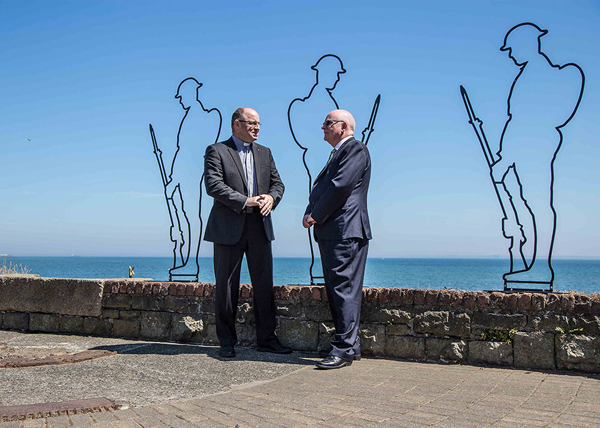 Mid and East Antrim Councillor Billy Ashe MBE and the Rev Alan McCann, Holy Trinity Woodburn, Carrickfergus, beside the Tommies in the shadow of Carrickfergus Castle.

A number of ‘Ghost Tommies’ are to be erected at locations across Mid and East Antrim to commemorate the centenary of the end of the Great War.

The poignant sculptures will be placed in Ballymena, Larne and Carrickfergus in memory of all those who lost their lives in the conflict. The Rev Alan McCann, rector of Holy Trinity Woodburn Parish, whose great grandfather William Kelly was killed at the Somme, has been heavily involved in the project.

Mr Ashe said: “The Ghost Tommies are powerful and striking displays in recognition and in honour of all those who made the ultimate sacrifice.

“The six-foot metal outlines of First World War soldiers have appeared at iconic locations elsewhere in the UK, including the Tower of London.

“These art installations are a reminder of the 888,246 British and Commonwealth soldiers who died and of those who survived but suffered physical and mental scars.”

Alan McCann said: “This initiative is something which is close to many people’s hearts, including my own.

“When I became aware of the Ghost Tommies I thought they were a wonderful idea, portraying hugely powerful symbolism.

“I have a copy of William’s death notice from the time and the story has captivated me over the years.

“Coincidentally, I played Irish League football for Portadown and Glenavon. Last year, Glenavon erected a memorial to all the players who had played for the club and lost their lives at the Somme, including William.

“This was the first time I heard he had been a goalkeeper for Glenavon – and 75 years later I would play for the same team. I had no idea.”

Alan added: “I am delighted Mid and East Antrim Borough Council has embraced this vital project and look forward to seeing the Tommies throughout the area.”

The Ghost Tommies initiative is part of the 2018 Armistice Project, There But Not There, which aims to educate all generations, particularly today’s younger generation, to understand what led to the horrific loss of life.

The Tommies will also support a new charity called Remembered. Its aim is to raise £15 million for Armed Forces and mental health charities to help heal those suffering from the hidden wounds of post-traumatic stress disorder and other lasting legacies of combat, by raising funds for our beneficiary charities.

One thousand Battle’s Over Beacons will be illuminated throughout the UK, the Channel Islands, Isle of Man and UK overseas territories, to commemorate and remember all those who lost their lives or were injured during the Great War.

Elected Members in Mid and East Antrim previously backed a proposal to mark a century from when the guns fell silent, with the beacons symbolising the ‘light of hope’ that emerged from the darkness of war.

The event, due to take place at 7pm on November 11 2018, will also honour the huge army of men and women on the home front who, often in dangerous and exhausting conditions, underpinned the war effort.