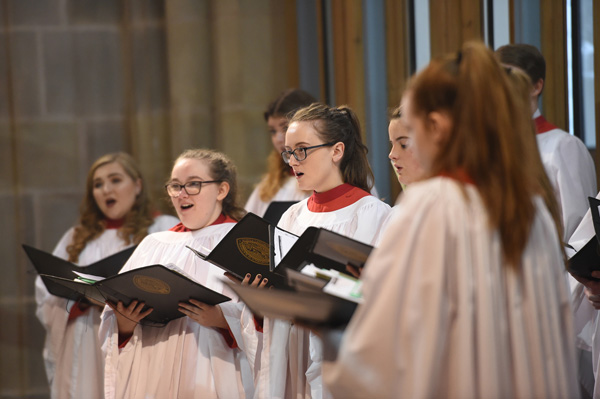 Belfast Cathedral welcomes The Young People’s Choir of Blackburn Cathedral this weekend, singing at services on Friday evening and on Sunday. The choir will also give a concert and an organ recital.

The Choir, directed by Shaun Turnbull, will sing Choral Evensong at 5.30pm on Friday 27th and at 3.30pm on Sunday 29th, and Eucharist at 11am on Sunday 29th. They will also give a concert at 1.30pm on Saturday 28th, and Shaun presents an organ recital on Sunday at 3pm before Evensong.

The choir was established more than 40 years ago, initially for choristers whose voices had changed.  Some years later, young ladies were admitted for the first time.  Until around 1998 the choir sang Choral Matins each Sunday morning.  The service since then has been a ‘Parish Eucharist’ which contrasts well in allowing a greater breadth of choral and congregational music and styles alongside the main Cathedral Eucharist sung later by the Boys and Men of the Cathedral Choir.

The Young People’s Choir has toured internationally and throughout the UK.  More recently, the choir travelled to Manchester to sing on the BBC Radio 4 Daily Service as well as contributing to broadcasting from Blackburn including Songs of Praise for BBC Television and Sunday Worship for BBC Radio. A recent further development of the Young People’s Choir’s schedule and repertoire is a monthly Choral Evensong.

The Young People’s Choir mini-tour to Belfast has come about thanks to the generosity of the Blackburn Cathedral Choirs’ Association.

Belfast Cathedral invites you to share a wonderful weekend of music.