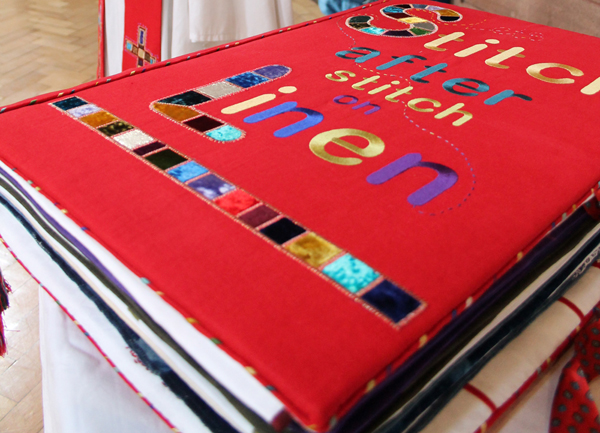 The book hand-crafted in linen which forms part of the exhibition currently running in Belfast Cathedral as part of the Linen Biennale Festival.

An exhibition focusing on the beautiful work of textile artists Wilma Kirkpatrick and Helen O’Hare, which has added to the textile collection at St Anne’s in recent years, has gone on display in Belfast Cathedral.

The exhibition is part of Northern Ireland’s Linen Biennale, which celebrates the past, present and future landscape of linen through an extended arts festival presented and hosted by multiple venues across the region.

The Festival runs throughout August, September and October and Wilma and Helen’s work is on display adjacent to the Titanic Pall which they created in 2012 for Belfast Cathedral to commemorate the 100th anniversary of the sinking of the ship. 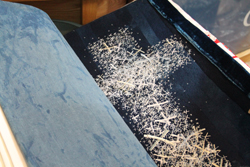 Titanic Pall recreated in the linen book which is on display in St Anne’s.

The striking deep blue pall, with its 1,500 gold crosses and a number of Stars of David, each representing a lost life, was Wilma and Helen’s first commission for the Cathedral. Both ladies are textile artists at Ulster University.

Since then, to complement the vestments of the Cathedral, a total of 24 stoles, four burses, four veils and four pulpit falls, crafted in Irish linen and embroidery, were created, all inspired by symbolism within the Cathedral.

A set of cream stoles, with white and gold thread, was the first to be created. The inspiration for the cross on this set was taken from the mosaic above the Cathedral’s main entrance.

Three more sets were to follow – the colours specifically chosen to reflect their use in the Cathedral on particular occasions, such as Christmas, Easter, baptisms, All Saints’ Day, and marriages.

The green set was inspired by the Queen’s seat, which has a carving of a cross incorporating a shamrock. The green stoles were intentionally understated as green is the colour for everyday wear in the Cathedral. 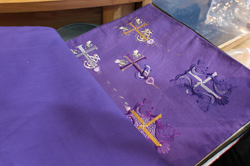 The exhibition includes patterns that were rejected as well as those used in the final works.

The third set, in violet, the colour used during Advent and Lent, was inspired by one of the Cathedral’s many wood carvings, while the final set, in red, was inspired by the Chapel of the Holy Spirit and incorporates references to the Spirit’s activity in relation to key biblical events.

In order to bring the inspiration and the crafting of these beautiful sets to life, Wilma has produced a large scale book, entirely made of linen, including the fabrics, the patterns, samples of work that were used and samples that were considered and discarded. There is also a section on the Titanic Pall.

“We created this book so that people could look through it and handle the fabrics,” said Wilma. “People can look closely at the Titanic Pall as it hangs in the Nave, but they cannot touch it. They can only look at the stoles as the clergy walk past. I am hoping that this exhibition will give people the chance to touch the fabric and look more closely at the needlework. They may also want to ask questions about the ideas behind the patterns.” 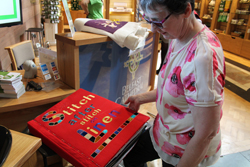 Wilma Kirkpatrick with the book she crafted in linen for the exhibition.

Wilma said she and Helen found the Cathedral to be an ‘inspirational place.’ “It just flowed into the last projects,” she said.

Wilma and Helen’s exhibition also features sample burses and stoles, and striking large scale print replicas of some of the work.

The aim of Linen Biennale is to stimulate new thinking about Ireland’s oldest textile products: flax and linen. For more information on the festival, visit http://www.linenbiennalenorthernireland.com/.