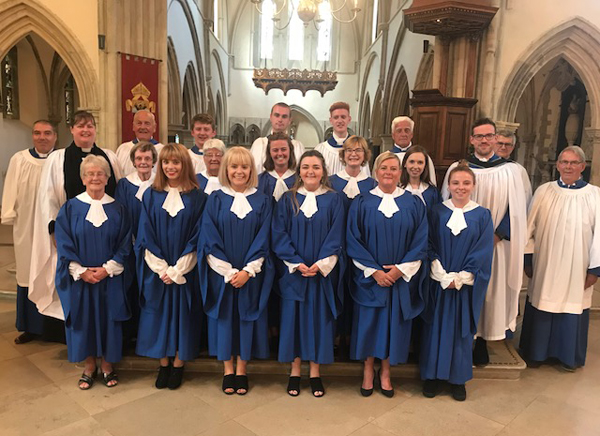 The choir of St Polycarp’s Parish Church pictured in the nave of Portsmouth Cathedral during their summer tour.

Portsmouth Cathedral is dedicated to St Thomas of Canterbury and known locally as the Cathedral of the Sea, reflecting its close association with the city’s seafaring community and the Royal Navy.

Although the history of the building dates back to the 12th century, it was raised to temporary cathedral status only in 1927, when the Diocese of Portsmouth was carved out of part of the Diocese of Winchester, and became a full cathedral in 1932.

The choir was welcomed by the Cathedral’s Precentor, Canon Dr Jo Spreadbury, who said that the Cathedral was most appreciative of visiting choirs who helped to maintain its tradition of choral worship during the summer months while the regular choir was on holidays.

Conducted by St Polycarp’s Director of Music, Simon Neill, the choir sang the St Polycarp Evening Canticles by Philip Stopford on the Monday evening and settings by Harwood in A flat on the Tuesday.

The choir also sang two anthems: On the Monday, Greater love hath no man by John Ireland and on the Tuesday, Haydn’s Insanae et vanae curae (‘Frantic and futile anxieties invade our minds’) from his first oratorio, ‘The Return of Tobias’. The hymns over the two evenings were Now the green blade riseth … and Thou art the way …

The guest organist was David Stevens, Organist and Master of the Choristers of St Anne’s Cathedral, Belfast.

Choir members were supported, as on previous tours, by a number of spouses and friends, with two past members now living and working in Manchester and London respectively travelling south especially to meet and sing again with former colleagues.

In sweltering conditions, there was also free time for the group to explore some of Portsmouth’s main attractions, including its redeveloped and bustling seafront and historic dockyard area, visiting the purpose-built Mary Rose Museum and exhibition, going up the landmark, 170-metre high Spinnaker Observation Tower, and taking a harbour tour or, in the case of the more adventurous (or foolish!), a powerboat ride around the harbour, the Solent, the site of the wreck of the Mary Rose, and the Isle of Wight.

Reflecting on the tour, Simon said: “Another year of music-making came to a close with St Polycarp’s choir, filled with so many dedicated, faithful and talented singers, visiting the wonderful Anglican Cathedral of Portsmouth.

“It was not only our honour but also a privilege to lead worship in this sacred place which boasts a terrific, youthful and vibrant choir.

“Each member of our choir, from the very youngest, self-funded their trip and all members always give so freely of their time and effort to continue the work and witness of St Polycarp’s at home and farther afield. Two scholars and I ran part of the Lisburn Half-Marathon in June to help cover some of the accommodation costs for the scholars.”

Looking ahead to the new academic year, Simon added: “We look forward to seeing what new and exciting ventures lie in store for the parish choir. It is our hope to welcome further scholars to the choir, as year on year, it continues to grow.

“I would like to thank all my singers for everything they do in service and witness to God and for the parish of Finaghy.”