Free recital by former Down & Dromore and Connor Organ Scholar 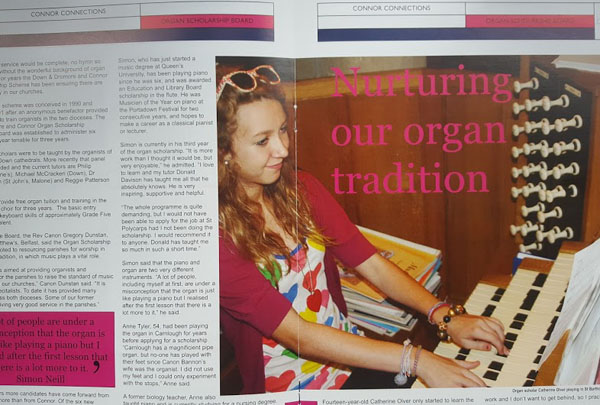 FLASHBACK: Catherine Olver featured in a Connor Connections article on organ scholars in October 2009 when she was just 15.

This Sunday Catherine Olver, who grew up in St Bartholomew’s Parish, Stranmillis, will give an organ recital in Belfast Cathedral.

Nine years ago, in October 2009, Catherine featured in the diocesan magazine Connor Connections as a 15-year-old student on the Down & Dromore and Connor Organ Scholarship Scheme.

Then she spoke of her dream of becoming an organist, despite admitting: “It was quiet scary at the start. When you make a mistake it is quite loud!”

Catherine has certainly achieved her ambition, and Belfast Cathedral invites anyone wanting to hear how accomplished this young lady has become to the free recital which begins at 3pm and finishes just before Choral Evensong with the visiting Vivamus Choir at 3.30pm.

Catherine began learning the organ with Donald Davison at the age of 15 as part of her three-year Organ Scholarship.

Since then, she has become an Associate of both the London College of Music in Piano Performance (2013) and the Royal College of Organists (2017) and has been Organ Scholar at both Rochester Cathedral and Corpus Christi College, Cambridge.

Amidst her busy schedule as a teacher and organist in Winchester College, Catherine now studies the organ with Gordon Stewart and Roger Sayer.

During her time at Corpus Christi (2014-2017), she participated in masterclasses with Ann Elise Smoot and Paul Brough, benefiting from a wealth of experience in choral conducting and organ playing.

Corpus Choir is fortunate to have toured internationally round France, Italy, Hong Kong, Singapore and New Zealand and to have performed in venues ranging from Notre-Dame Cathedral to the indigenous Marae in New Zealand’s Bay of Islands.

One of Catherine’s highlights during her time at university was when she played Continuo alongside Cambridge Baroque Camerata in performances of JS Bach’s St John Passion and Handel’s Messiah.

Aside from her organ studies, Catherine has always been an enthusiastic choral singer. In her final year at Cambridge she performed as a soloist in a premiere of Telemann’s undiscovered works – namely, a selection of Polish- and Czech-themed concertos, sonatas and arias.

Catherine has enjoyed a year as Acting Assistant Director of Chapel Music in Winchester College, relishing the opportunity to work closely with Winchester College Chapel Choir in performances of Brahms’ Ein deutsches Requiem and J.S Bach’s Mass in B minor.

She looks forward to continuing her music-making at St Catherine’s School, Bramley, where she will take up the role of Teacher of Music and Head of Organ Studies in September this year.

Performance has always been at the heart of Catherine’s musical career. Having recently played at Exeter College Oxford, Rochester Cathedral and St Matthew’s Cathedral, Auckland, she looks forward to playing in Belfast Cathedral on August 19.

Catherine’s programme is as follows: