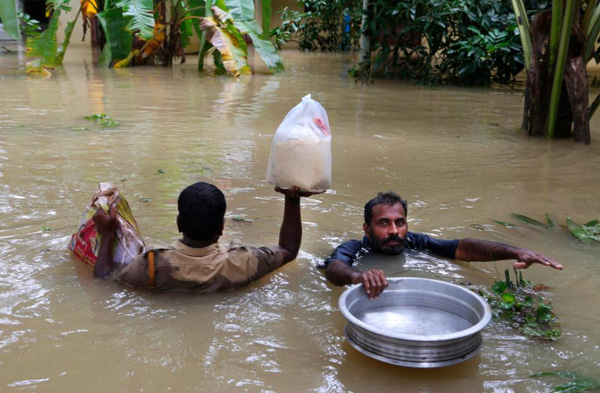 Around one million people in Kerala, India, have been forced to flee their homes due to devastating floods.

Christian Aid has launched an appeal to help the people of flood-stricken India and has asked churches to pray and give this Sunday as the scale and extent of the impact of the rains in Kerala become apparent.

Christian Aid is on the scene working through its well-established partners to provide life-saving assistance for around 20,000 people who have lost their homes.

Households will be given sanitation supplies and access to safe drinking water, hygiene essentials such as soap, and shelter materials including tarpaulin, rope and blankets.

The aid will help people survive the worst monsoon rains in a century which have reportedly claimed the lives of almost 400 people, contaminated water supplies and destroyed livelihoods.

“Many people are currently sheltering in government-run camps and one major worry is how they’re going to recover their lives when they try to go home,” said Christian Aid’s Emergency Programme Officer Shivani Rana, who is in Kerala.

“For some families, everything they had has been washed away or ruined.”

She added: “The rains have caused flooding and also landslides – and we still don’t know how bad the damage is because many areas remain impossible to reach.”

Christian Aid’s relief work in Kerala has been kick-started with a £77,000 grant from the UK government-backed Start Fund, which releases money quickly after disasters, to enable rapid responses.

The charity has also released £30,000/ €33,000 from its own funds and hopes to scale up its emergency response, working through its local partners in the region.

So far, Christian Aid plans to focus its response on the hard-hit Wayanad district in the north of Kerala and Idukki district in the centre of the state. It will support 10,000 people in each of the two districts, targeting areas where many people are considered to be Dalits and ‘Tribals’ – among the most deprived and excluded in society.

For more information on the appeal visit christianaid.ie