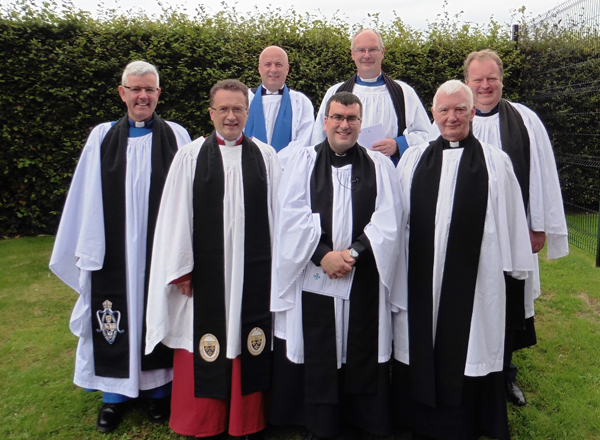 At the Service of Introduction in Kilwaughter and Cairncastle with All Saints’, Craigyhill, are, from left: Dean Stephen Forde (preacher), the Ven Paul Dundas, Archdeacon of Dalriada, William Patton (Parish Diocesan Reader), the Rev Philip Benson, the Rev Canon Mark Taylor, the Rev Harold Sharp and the Rev David Lockhart.

A large congregation was present for the introduction of the Rev Philip Benson as Curate-in-Charge of the Parish of Kilwaughter and Cairncastle with All Saints’ Craigyhill on Sunday September 2.

The service, in All Saints’ Parish Church, Larne, was led by the Rural Dean, the Rev Canon Mark Taylor and the Ven Paul Dundas, Archdeacon of Dalriada. The Very Rev Stephen Forde, Dean of Belfast, was the preacher.

Philip is married to Carolyn, and they have a daughter, Hannah. 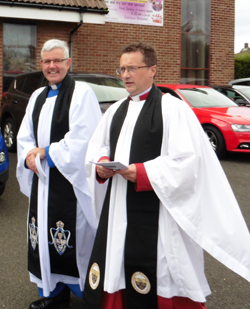 Dean Stephen Forde, preacher, and Archdeacon Paul Dundas at the service in All Saints’, Craigyhill, Larne.

A native of Bangor, Philip grew up attending Carnalea Methodist Church, where he was a member of the BB, attended the YF and later became a leader. He went to school at RBAI and studied Theology at Queen’s University, Belfast.

After graduating Philip worked for Goldsmiths Jewellers while completing a Theology Master’s Degree part-time. In 2009 he began working as a youth worker full time, and also helped to lead the youth group at St Gall’s Carnalea.

Around this time Philip began to explore his vocation and he was accepted for training in 2012.

He is currently chair of the Connor Youth Council. His interests include football, movies, music and history.

At the service Mr Harry Carter paid tribute to Philip and his family on behalf of the Grouped Parishes of Larne and Inver with Glynn and Raloo, while the family were welcomed to their new parish by Maureen McGaughey from Kilwaughter and Cairncastle with All Saints’.

Following the Service of Introduction and welcome on Sunday, light refreshments were served in the halls of Craigyhill Presbyterian Church. 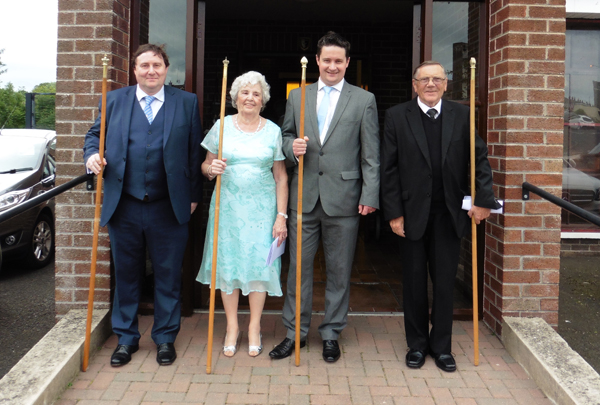 All Saints’ Parish Church was packed for the introduction of the Rev Philip Benson as Curate-in Charge on Sunday September 2.