Introduction of the Rev Adrian Halligan in Craigs, Dunaghy and Killagan 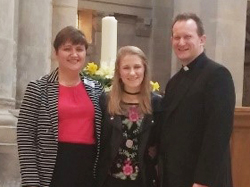 The Rev Adrian Halligan with his wife Wendy and daughter Abigail.

The Rev Adrian Halligan will be introduced as Curate-in-Charge of the Parishes of Craigs, Dunaghy and Killagan at a service in Craigs Parish Church, Cullybackey, on Wednesday September 12.

The service, which begins at 8pm, will be led by the Rural Dean, the Rev David Ferguson, and the Ven Paul Dundas, Archdeacon of Dalriada.

The preacher is the Very Rev John Bond, former Dean of Connor and a former rector of St Patrick’s Broughshane, where Adrian was Curate during his transfer training from Non-Stipendiary Ministry (NSM) to Stipend Ministry.

Adrian was ordained a Deacon in January 2011 in All Saints’ Parish Church, Antrim, where he served as Curate and was also ordained there as Priest in November 2011. After his first curacy in Antrim he moved to Skerry, Rathcavan and Newtowncrommelin in Broughshane for three years.

Born in North Belfast, Adrian grew up attending Whitehouse Presbyterian Church.  He is a past pupil of Belfast High School and studied Electronic Engineering at the University of Ulster, Jordanstown.

After graduating Adrian worked for Nortel Networks as a Telecommunications Engineer where he completed further studies, obtaining a Master’s Degree at the University of Ulster, Coleraine.  During his time in Nortel he met his future wife Wendy, and they both attended Wendy’s home church of St John’s, Whitehouse, where they were married in April 1999.

Following redundancy from Nortel Networks, Adrian was offered a position as Lecturer in Computing at South Eastern Regional College (SERC), Lisburn, and more recently he has lectured in Belfast Metropolitan College.

Adrian started to explore his vocation during his time at SERC.  In 2006 Adrian was accepted for NSM training in what was formally known as the Church of Ireland Theological College.

Adrian and Wendy have one daughter Abigail, who is currently studying for her A Levels. Adrian’s interests include rugby, caravanning, movies, reading, the family cats Moses and Esther and his puppet collection!

Following the service on September 12 light refreshments will be served in Craigs Parish Church Hall.