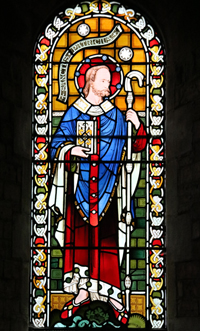 The photograph of the stained-glass window shows Saint Patrick, to whom the church was dedicated. He is shown in episcopal dress; in his left hand is a crozier, copied from a sketch by John H.Bland, Esq., of an ancient Irish crozier now in the British Museum; in his right hand he carries the Gospels. He is standing over a snake, which recalls the ancient legend that Saint Patrick cast the snakes out of Ireland. Photo: John Lendrum.

Jordanstown Parish, which this year celebrates its 150th anniversary, is launching an updated History of St Patrick’s Church, Jordanstown, on September 28.

The book reflects on 150 years of worship and praise in Jordanstown.

The Church of St Patrick was consecrated on August 15 1868 by the Rt Rev Robert Knox, Church of Ireland Bishop of Down, Connor and Dromore.

The Church is built in the Celtic tradition, reflecting the origins of Christianity on this island.

Much has happened since 1868. Jordanstown has changed from a place in the country into a virtual suburb of Belfast, and this once close-knit community is now a very diverse neighbourhood.

History of St Patrick’s Church, Jordanstown is a beautifully illustrated history of the Church and Parish, and it has been specially updated for the anniversary.

The launch takes place on September 28 at 7.30pm in the main Church Hall at St Patrick’s on the Jordanstown Road, in the presence of a number of distinguished guests including the Bishop of Connor and the Mayor and Chief Executive of Antrim and Newtownabbey Council. 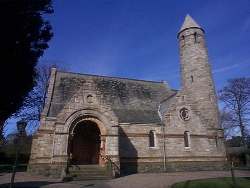 A detail from a photograph of the beautiful south wall Rose Window has been used on the front cover.

Following the launch of the book, it will be on sale from the Church Office. To order a copy contact stpatricksoffice@btconnect.com; tel: 028 9086 9832.