Synod hears how parishes are making a difference 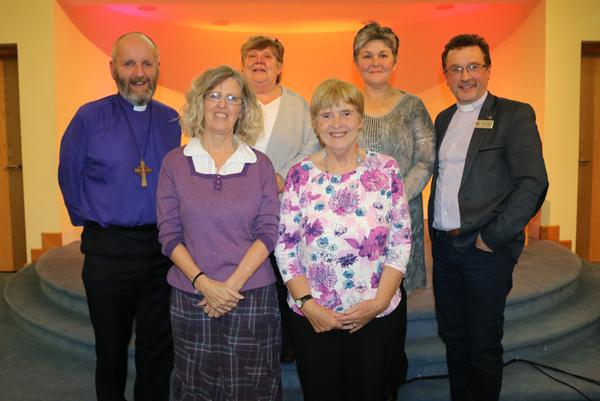 Some of those who took part in the evening session of Synod which heard stories of outreach work in parishes, with Bishop Alan Abernethy and Archdeacon Paul Dundas. Included are Alison Shaw and Dorothy Coates, front, and Janis Bennett and Heather Smith, back.

Real stories told by real people about how outreach work in our parishes is making a real difference in lives featured during the evening session of Connor Diocesan Synod.

Members heard how lives had been touched not only at home, but in Africa, and how perseverance, imagination and faith is bringing a community back to church.

It was chaired by the Ven Paul Dundas, Archdeacon of Dalriada, who said that the stories being told proved ‘the impossible is possible’ and showed God at work. 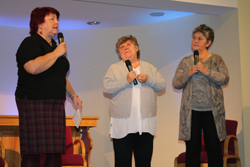 First to speak were sisters Janis Bennett and Heather Smith from Ardoyne, who were interviewed by Karen Webb from the North Belfast Centre of Mission about their experience of an Alpha Course run in Immanuel Parish Church. Synod heard that during the weeks of the course, the Sunday Service moved from the Church to the Parish Hall, where worship was followed by Alpha.

Janis said: “Before going along I was petrified and apprehensive, but it was not long before I realised it was fine and that you cannot say a wrong thing. It is about your own opinion and your own perspective on things. Everybody participated and got something out of it.

“The best bit was seeing elderly people in the congregation who would never had said much talking quite freely by the end.”

Heather said: “Alpha definitely made a difference to me. I loved being in the groups and sharing different experiences.

“As a parish, it gave us an opportunity to explore our faith. It gave us all food for thought.”

The next parish to tell a story was St Aidan’s, Belfast, represented by Dorothy Coates, a member of the Select Vestry, and Alison Shaw, community outreach worker. Dorothy explained that six years ago St Aidan’s felt it didn’t have a future. “We were static, with nowhere to go, we were just ticking over,” she said. 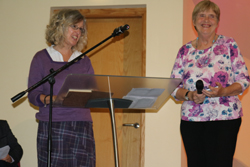 Alison, left, and Dorothy, share the story of St Aidan’s.

Now that has changed. “We have a structure in place to plan for the future,” Dorothy said.  “We have an enthusiastic congregation which has embraced what we are trying to do. The Select Vestry is planning ahead. We are now in a great place to show our love of God within the community.”

Dorothy said this was down to the realisation and desire to bring about change, and having different people in the right place at the right time.

“For most of my life in St Aidan’s I had been waiting for the community to come to me. It was a big shock when I realised they weren’t going to come,” Dorothy said. “Alison has taken St Aidan’s into the community.”

The arrival of the Rev Bobbie Moore, who Dorothy described as ‘a delegator, an enabler, an encourager,’ was also key to this change, and the support and guidance of Diocesan Development Officer Trevor Douglas has been vital. “Trevor took our ideas and came back and organised us into groups,” Dorothy said.  Each group was headed by someone with the appropriate skills.

“God gives us the strength to do whatever we want to do. We want that love shared into the community.” Dorothy said.

She outlined activities that had engaged the community, including a production of Joseph, a Burns Night, a Vera Lynn Night and a Barn Dance. “We are planning a big WW1 centenary event, and just last week we were approached by members of the community offering to help with costumes, and a piper willing to play at it,” Dorothy said.

“The community has started to come in.”

Alison outlined other ways St Aidan’s was engaging with local people, including supporting the South Belfast Foodbank and Messy Church which takes place on a Friday afternoon and has 25 core members. The focus of Messy Church is that it is a place of hospitality,” Alison said, “People say they keep coming because they are welcomed, accepted and listened to. Our deepest desire is that everyone one of us in Messy Church will know we are infinitely loved.” 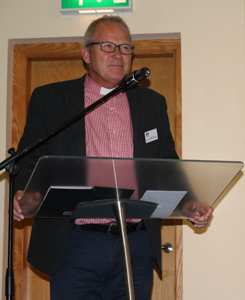 The Rev Andrew Sweeney spoke about Filling Station in Ballymoney.

Ballymoney, Finvoy and Rasharkin was the next parish on stage, and the rector Andrew Sweeney spoke about the Filling Station initiative, now in its fourth year.

Andrew said the parish had been looking at providing different platforms of ministry so people could find their way to the platform that was right for them. The core values were ‘Love God, love each other and serve the world,’ and Andrew said these values were all met by one ministry – Filling Station.

There are around 100 Filling Stations in England. Meetings are not held in a church, they are held mid week and feature a guest speaker and good contemporary music. Filling Station meets in The Old Schoolhouse in Ballymoney.

“It is not just for our own Church. It is for any Christians who want to experience something deep and meaningful. We get around 100 people coming each month from different churches,” Andrew said.

“A number of people have found a hunger for God, and it is a big thing to see church communities in Ballymena working together. It is a blessing for the whole community.”

Synod heard how one man’s experience in Africa many years ago has had a major impact on the community of Greenisland. Tony Jones founded of African Child Ministries in 2005 after witnessing children ‘with nothing, not even drinking water’ during a visit to Kenya.

Tony told the Rev Barry Ford that he had shared this with others in the church, and in order to raise funds for the children, they set up a stall selling cut price food items in the parish car park every Saturday morning. Soon there was a shop in Carrickfergus too. Eventually it was suggested that a permanent purpose-built shop be opened in the parish car park and this has now become the hub of the community. 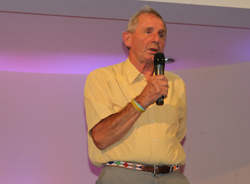 “People are coming into the church grounds, they come into the shop and they share stuff with us, stuff that is really troubling them. Sometimes they ask us to pray for them in the shop, I find that a real privilege.”

In the past 13 years, African Child Ministries has sent more than £200,000 to Africa, and has supported the communities there in other ways such as building projects, and sending out motorbikes. They charity is now looking at supporting children in Africa with disabilities. “Sometimes they are left to die,” Tony said.

Thanking all those who had told their stories, Archdeacon Dundas said: “There is always a future. You have to think differently.”