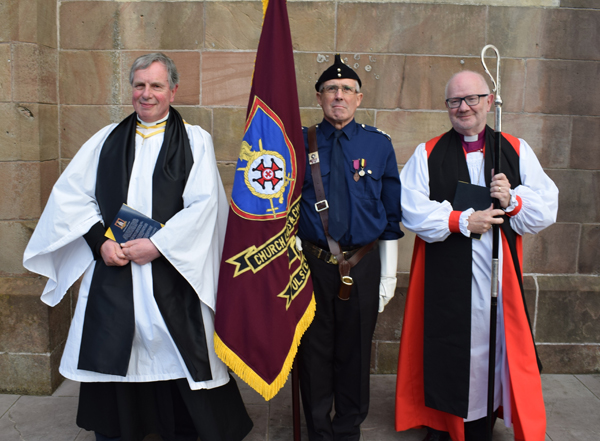 The New CLCGB Colours carried by Michael Warnock of Portrush Company, with Dean Robert Townley and Archbishop Richard Clarke, who carried out the dedication.

St Patrick’s Cathedral, Armagh, was filled to capacity on September 30 for a celebration marking 125 Years of the Church Lads’ and Church Girls’ Brigade serving the Church of Ireland.

This was the CLCGB’s largest parade for some years, with nearly 600 members and officers on parade, marching up the hill to the Cathedral led by Aghavilly Accordian Band and the Clarke Memorial Flute Band.

The Brigade was honoured to have Mrs Jill Armstrong, Deputy Lieutenant for County Armagh, and Councillor Julie Flaherty, Lord Mayor of Armagh City, Banbridge and Craigavon, present for this Service of Thanksgiving. 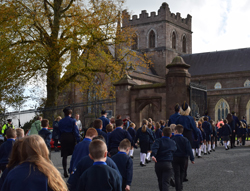 The Dean of Armagh, the Very Rev Gregory Dunstan, welcomed all those present to the Cathedral wishing them continued fulfilment in Christ’s service in the years to come. The Very Rev Robert Townley, the Brigade’s Regimental Chaplain, conducted the Service, assisted by CLCGB Development Officer, Victoria Jackson.

An integral part of the service was the dedication of new Colours in memory of former CLCGB Commanding Officer, Harry Anderson. In the presence of many of the Anderson family, the Most Rev Dr Richard Clarke, Archbishop of Armagh, carried out the dedication.

The collection lifted towards the end of the Service will go to the Leprosy Mission NI, which has been the Brigade’s charity for many years.

At the conclusion of the service, the Brigade reformed into its Battalions and paraded back down the hill. The Deputy Lieutenant, Mrs Armstrong, took the salute just outside the Cathedral gates.

The day had gone well and the Brigade had marked its 125th Anniversary in a fitting manner. 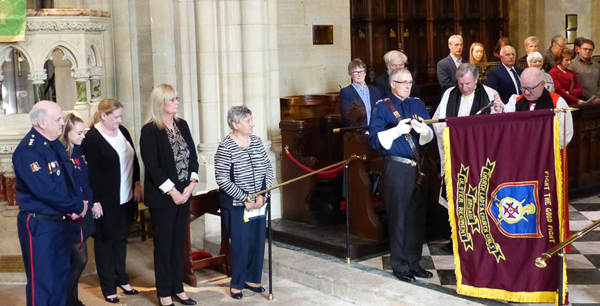 Mrs Margaret Anderson and family from Newtownabbey watch as the Colours are dedicated by the Archbishop.