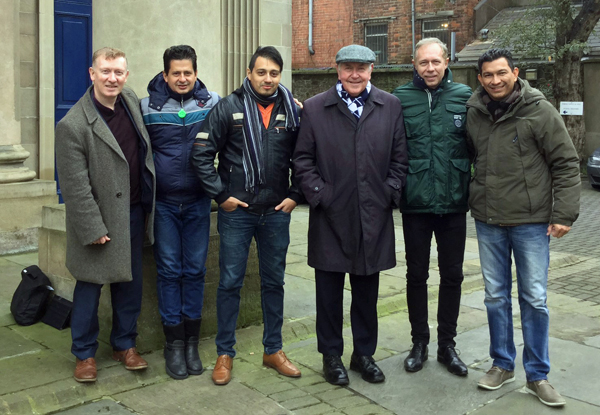 A team from Divine Healing Ministries (DHM) today, Wednesday, leaves Belfast for a mission trip to Bolivia. They return on October 26.

The team was recently commissioned at a service in St Anne’s Cathedral, Belfast.

This will be a challenging trip as the team will be based in the city of La Paz, which is 12,000 feet above sea level. Their host will be Pastor Hendrik Hoere, a Dutchman who has worked in South America over the last 30 years. Pastor Hendrik and his wife Teija are highly respected among the numerous small independent churches which are typical in Bolivia.

The Rev Canon Brother David Jardine, Director Emeritus of DHM, has partnered in mission with Pastor Hendrik for more than 15 years. As well as Brother David, the mission team includes Fergus McMorrow, Director of DHM, and Jonathan Kennedy. At the Commissioning Service, Brother David spoke about his previous visits to South America. Jonathan read from Matthew 28:16-20, the Great Commission.

Brother David paid tribute to Pastor Hendrik, describing him as ‘one of the greatest men produced by the Church in the 20th century.’  David added: “We travel to South America to support the work he does in very poor communities.”

David, a fluent Spanish speaker, said that God had given him Psalm 91:1-2 for this mission to Bolivia: “He who dwells in the shelter of the Most High will rest in the shadow of the Almighty. I will say of the Lord, ‘He is my refuge and my fortress, my God, in whom I trust.”

Fergus McMorrow said: “We are very grateful to all those who are making this trip possible, those who are supporting financially and with prayer.”