Members of the Choir of St Bride’s Parish Church, Kilbride, join the Rev Canon David Humphries to stow away the time capsule in the church grounds.

The parishioners of Kilbride Parish in 2068 will learn all about life in the parish in 2018 when they open a time capsule buried at St Bride’s Church as part of the parish’s 150th anniversary celebrations!

The specially crafted capsule was stowed underground on Sunday October 21. Around 100 people watched as it was put into the ground, below a marble plaque bearing the words from Hebrews 13:  “Jesus Christ, the same yesterday, today and forever.”

The 150th anniversary of the consecration of St Bride’s was June 9, and during the course of this year the parish has organised several events to help celebrate it this milestone, including a big celebration service on June 10 at which the Primate, the Most Rev Dr Richard Clarke, preached. 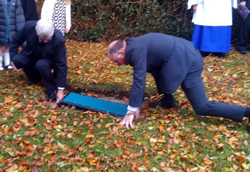 Burying the capsule which wlll not be unearthed until 2068.

The rector of Kilbride, the Rev Canon David Humphries, said: “One of the things which we thought would help the children to get involved was to bury a time capsule in the church grounds, to be brought up, say, in 50 years’ time – the year of the 200th anniversary of the consecration!

“The kids got involved in a big way, both as individuals and through their organisations.  Paintings and other ‘arty’ works were included, as well as details of the uniformed organisations, their badges, etc.”

David said the capsule also contained a project on Sterling Currency as it is used today; the original key of the church door, and many photos of parish events, Select Vestry meetings, and more.

Finally, a letter from the rector today to the rector at the time of the 200th anniversary was included.

“We found that we had to think very hard about what parish life might be like in 50 years’ time, and whether or not the people would understand everything that we put into the box,” David said.

“Also, in the light of some rather famous disasters with time capsules, we made as sure as we could that the box and its contents would survive 50 years underground.

“We created a waterproof chamber and we sealed the box professionally so that everything would remain intact. We have placed a notice in the vestry informing people of the existence of the box, and when it should be brought up.”

The box is now secure under its concrete plaque, and perhaps some of the children who contributed to its contents will be involved in its excavation in 50 years’ time!