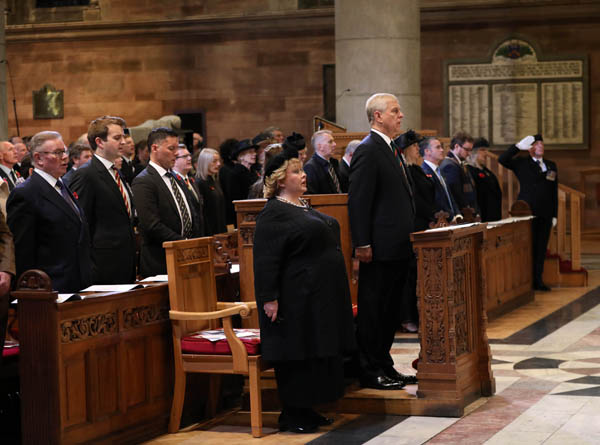 His Royal Highness the Duke of York pictured at at the commemorative service for the Centenary of the Armistice at St Anne’s Cathedral, Belfast. alongside Her Majesty’s Lord Lieutenant for Belfast Fionnuala Jay-O’Boyle. ©Press Eye/Darren Kidd

Belfast Cathedral hosted a poignant commemoration on Sunday November 11 marking the Centenary of the signing of the Armistice at the end of World War One.

Relatives of those who were killed or maimed in the 1914-1918 conflict gathered with others from all over Ireland with links to that war for a service broadcast live on BBC TV and radio. (PHOTO ALBUM)

His Royal Highness The Duke of York KG was in attendance and read a lesson. Other key figures included Secretary of State Karen Bradley, Her Majesty’s Lord Lieutenant for the City of Belfast, Mrs Fionnuala Jay-O’Boyle, Irish Government Minister Damien English, City Councillors and politicians. 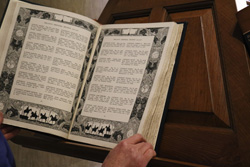 A guest looks through one of the Cathedral’s Books containing the names of those from Ireland who died in World War One.

Also in the congregation having flown to Belfast from New York were Josh and Will De Wind, descendants of war hero Second Lieutenant Edmund De Wind. De Wind was awarded a Victoria Cross for bravery at the second Battle of the Somme at which he died in 1918, and his name is carved on a pillar on the West Front of Belfast Cathedral.

The special guests were welcomed by the Dean of Belfast, the Very Rev Stephen Forde, and Sir Jeffrey Donaldson MP, Chairman of the Northern Ireland First World War Centenary Committee.

Lessons were read by The Duke of York and Sir Jeffrey Donaldson.

The commemorations began early when, at 6am on the 11th day of the 11th month,  Pipe Major Margaret Hill from Cookstown played The Battle’s O’er. St Anne’s was one of 2,000 locations nationwide taking part in this early morning opening of Armistice Day.

The Cathedral held its own Service of Remembrance on Sunday morning. The afternoon service was the last major event in the centennial commemorations of the war, and coincided with services in Dublin, Glasgow and Cardiff, ahead of the national service at Westminster Abbey. 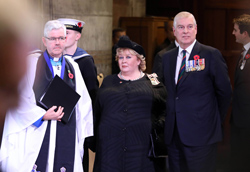 The service followed a traditional evensong format, led by the choir of Belfast Cathedral, members of the Ulster Orchestra, under the direction of the Choirmaster David Stevens. Acting Organist was Mark McGrath, choirmaster at St Malachy’s College, Belfast, and conductor of the Belfast Phoenix Choir. Cantor was the Rev Julie Bell, a Minor Canon of Belfast Cathedral.

The emphasis of the service was on remembrance and reconciliation, with poet Michael Longley reading his acclaimed work ‘Ceasefire.’

To coincide with the service, a new collection of poetry, ‘Wake up Jamesie Lad,’ written for the Armistice by local man Paul Gilmore, has been published.

A new choral anthem specially commissioned for the service was sung beautifully by the Cathedral Choir. The music was by Irish composer Eoghan Desmond and the words were drawn from a poem written in 1915 by Lisburn poet Katharine Tynan. Entitled ‘Flower of Youth,’ the Anthem acknowledges the deaths of so many young men on the battlefields and imagines their arrival in heaven:

In a significant change to traditional commemoration services, this service featured a moment of reflection rather than an act of remembrance. Instead of laying wreaths, several volumes of Ireland’s Memorial Records, held in St Anne’s, were laid at a field altar. The books were borne by people who have at least one family member who was killed in the war and is named in the memorial records. 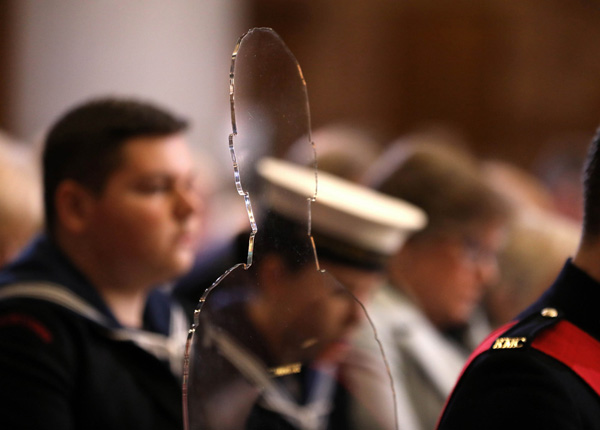 One of 10 perspex silhouettes occupying seats in the Cathedral, representing the 10 servicemen whose names were read out during the service. There but not there. Gone but not forgotten. ©Press Eye/Darren Kidd

As the sun set, a lantern was borne outside the Cathedral as all gathered inside, and those watching on television or listening on radio, remembered all the fallen.

In his address, Archbishop Martin focused on peace and reconciliation, and spoke about the pilgrimages he and Archbishop Clarke had made together to Ypres. Just miles from the Menin Gate, on his first visit, he located the grave of his great uncle Edward at Canada Farm cemetery.

“Because he was tall and strong from working on the farm in Donegal, they put him to operate the heavy guns of war,” Archbishop Martin said. “Today he lies in Flanders fields, another young man among the half a million who perished in the infamous battle of Passchendaele, in the ‘flower of youth’.”

The Archbishop told the congregation: “The brave people we are remembering are calling us to recognise their shared suffering by building a better future where difference is accepted and respected.”

He asked if lessons could be learned from their shared sacrifice, a full century after the so-called ‘war to end all wars.’

“They have bequeathed us a shared responsibility for healing the past and building lasting trust and peace. Peace is not merely ‘ceasefire’ or the absence of violence and war. Peace is an ongoing work of reconciliation, justice and hope: It means coming out of our own trenches; building bridges, not parapets; ‘beating swords into ploughshares, spears into pruning hooks (Isaiah 2),’” the Archbishop said.

“Our hope remains for a lasting peace on the island of Ireland. May Christ, the Prince of Peace, help us make that hope a reality for the youth of today and tomorrow.”

In his words of welcome, the Dean of Belfast, the Very Rev Stephen Forde said:  “In this unique and special service, we will both remember the loss, but also lay hold of the hope which those who suffered and those who died in the Great War held: The hope that theirs was the ‘war to end all wars.’ Our greatest tribute 100 years later will be to succeed in that ambition for peace. There could be no greater way by which we can declare ‘We will remember them.’”

He said there had been traditional acts of remembrance, the recognition of more than 40 Irish recipients of the Victoria Cross and the names of many more men and women had been added to memorials old and new.

‘Ulstermen and Irishmen have been remembered in all the places they fell,’ he said. 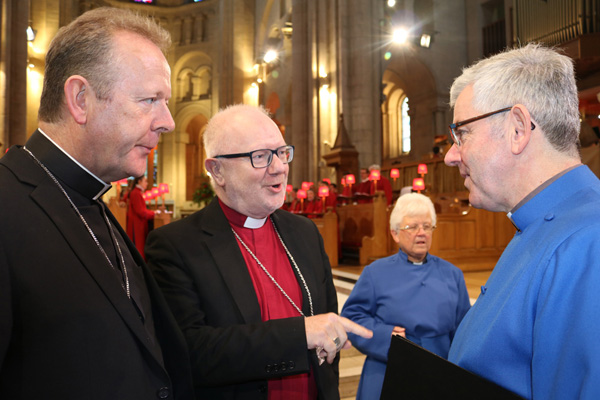 Dean Stephen Forde with the Most Rev Eamon Martin, Roman Catholic Archbishop of Armagh, who preached at the service, and the Church of Ireland Primate, Archbishop Dr Richard Clarke, who gave the blessing.

“Far from being purely symbolic, a deeper understanding, tolerance and respect has flowed from these events. Relationships built that have already proven their worth and will last. No one’s unionism or nationalism is diminished as a result,” Sir Jeffrey stated.

Tánaiste Simon Coveney wrote in the Order of Service.

“The First World War was a devastating human catastrophe. It tore nations and families apart. It shaped the history and politics of a continent. Its impact was felt personally, and too often tragically, in every corner of the island of Ireland.

“For far too long remembrance of the war on the island was a source of division. There was a sense that commemoration of the young Irishmen who died in the Somme or Gallipoli was a political declaration, or a marker of community identity.”

“In recent times, and as we have marked the centenaries of the events of that decade, we have seen something very different. We have seen leadership and scholarship and sensitivity and generosity.”

Reflecting on the words of Tom Kettle before he died at the Battle of Ginchy – ‘if I live I mean to spend the rest of my life working for perpetual peace’ – the Tánaiste stated: “That is the spirit we must take with us and build upon as we commemorate upcoming centenaries and as we continue to remember, far into the future, all the men of Ireland who fell in the First World War.”