Menu
Home > News > CANTATE! – a concert of hope and celebration

CANTATE! – a concert of hope and celebration 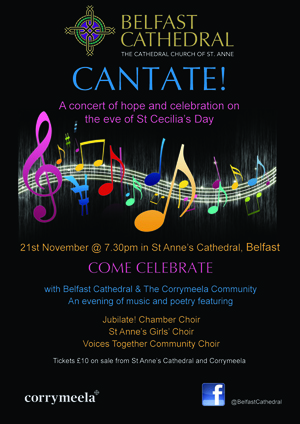 St Cecilia, Patron Saint of Music, will be honoured in Belfast Cathedral on Wednesday November 21 when the Cathedral joins with Corrymeela to present CANTATE! – a concert of hope and celebration.

There will be poems and reflections by the Very Rev Stephen Forde, Dean of Belfast and Pádraig Ó Tuama, renowned poet and leader of the Corrymeela Community.

St Cecilia, born in the second century, is a famous Roman Martyr – she was reported to have been beheaded by a sword. As Patron Saint of Music, a number of musical compositions are dedicated to her, and her feast day, November 22, has become the occasion for concerts and musical festivals.

The concert in St Anne’s Cathedral will raise funds for the mission and ministry of the Cathedral, and support the Corrymeela Community, Northern Ireland’s oldest centre for peace and reconciliation based on the north coast.

Belfast Cathedral Girls’ Choir, formed in 2012, consists of 20 girls aged 11-18 from various schools in Belfast. They sing Choral Evensong on Mondays and Wednesdays and both the Eucharist and Evensong every other Sunday. Already a musically accomplished ensemble, they have broadcast on BBC Radio Ulster, recorded part of a soundtrack for the Ulster Folk and Transport Museum, and toured France in the summer of 2015.

Both Jubilate! And Voices Together were founded by Dave Stewart, a former student at the School of Music at Queen’s University, Belfast.

Jubilate! was established in 1987, originally as a youth choir. It became an independent choir in 1994 and has been singing ever since at concerts, liturgical events and radio and television broadcasts for BBC and RTE. The choir has also made three recordings.

Voices Together is an inclusive community choir which draws its membership from a wide range of backgrounds in Northern Ireland. Voices Together celebrates ‘the music in diversity and the diversity in music’, and the programme on November 21 will include spirituals, contemporary gospel, protest songs, and African folk melodies. Voices Together has sung in many concerts and liturgical events since 2012, and has also broadcast on Radio Ulster.

Mrs Desney Cromey, a Cathedral parishioner and a member of Corrymeela, is one of the concert organisers. “Belfast Cathedral and Corrymeela have a well-established working relationship and Dean Stephen Forde and Pádraig Ó Tuama are keen to further reconciliation and outreach in Belfast,” Desney said.

“This is an opportunity for us to work with some of the best resources we have which on this occasion is beautiful music. It will be a superb evening.

“The concert takes place the week before Advent. It is a peaceful time and it will give people an opportunity to reflect with some of the music leading into Advent.”

“It will be a cold winter night so please come in and warm your heart with some heavenly music.”

The concert gets underway at 7.30pm on November 21. Tickets, at £10, are available from the Belfast Cathedral office or from Corrymeela.