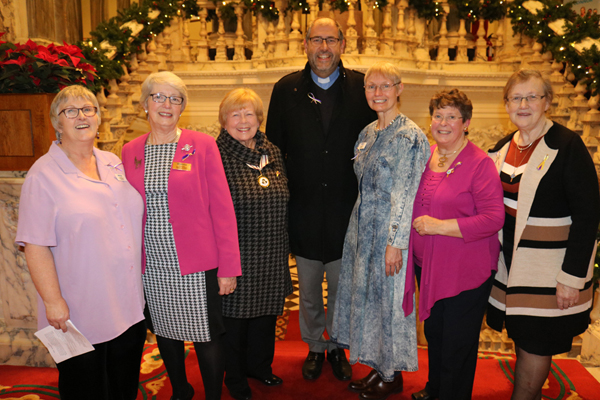 The issue of violence against women at home and around the world was highlighted at a Vigil hosted by Connor Mothers’ Union in Belfast City Hall on Monday November 26.

The Vigil and Reception, attended by Her Majesty’s Deputy Lord Lieutenant for the County Borough of Belfast, Mrs Michele Marken, was organised to raise the profile of the Mothers’ Union’s 16 Days of Activism against Gender-Based Violence Campaign.

The guest speaker was Jacqui Armstrong, All Ireland Faith and Policy Co-ordinator. Other high profile attendees included Phyllis Grothier, All Ireland Mothers’ Union President; the Archdeacon of Belfast, the Ven George Davison; and Heather Flanigan of the Christian Police Association.

Representatives of branches across Connor Diocese were among the 75 guests.

The international 16 Days of Activism against Gender-Based Violence Campaign takes place each year from November 25 (International Day for the Elimination of Violence against Women) until December 10 (International Human Rights Day).

Throughout the campaign, Mothers’ Union joins many others globally in calling for an end to gender-based violence in all forms and in all societies.

Following refreshments on Monday evening, guests were welcomed by Valerie Ash, outgoing President of Connor Mother’ Union, who played a short video about the work of Mothers’ Union.

All Ireland President Phyllis Grothier highlighted the importance of the 16 Days of Activism. “This campaign is at the core of what Mothers’ Union is all about as we reach out to families who don’t enjoy all that should be in a family relationship,” she said. “We seek to stand with people who are in trouble and let them know that we care, to let them know that there is another life out there.”

In her address, Jacqui Armstrong said that when she began working on this campaign in 2014, she had no idea of the extent of gender based violence, particularly against women.

“Gender based violence is a new term and means violence against women and men, but our 16 Days campaign focuses on women due to the disproportionate number of women affected,” Jacqui said.

One in three or one on four women will be affected, and the statistics are the same in every continent, she said. In Northern Ireland five people a year are killed by their partner, and the victims are predominantly women.

The campaign aims to explore the root causes of gender based violence, to highlight the issue of abuse and to seek to end it.

During the 16 days, Mothers’ Union members will be lighting candles, tweeting daily, writing to politicians and undertaking other activities to highlight the issue, Jacqui said.

She spoke about how the Mother’s Union was also tackling gender based violence overseas, using as an example the Democratic Republic of Congo where, thanks to intervention by the Mothers’ Union Prison Programme, prison authorities had agreed to house women and children in separate sections of a prison to men.

Jacqui concluded quoting the words: “Let us not love with words or speech, but with actions and in truth.”

Before leaving, guests were invited to view the exhibition ‘Souls of our Shoes,’ which uses footwear to tell stories of survivors of gender based violence.