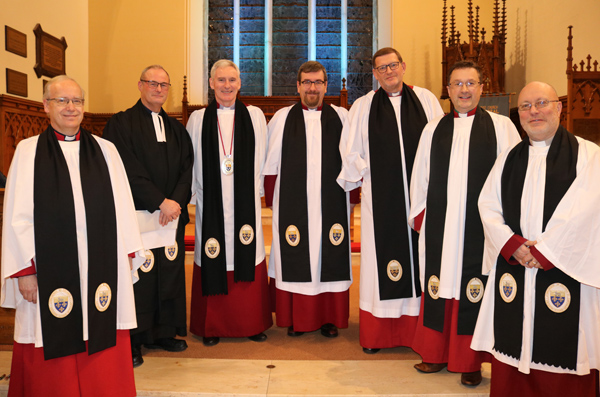 The Rev Mark McConnell was installed as a Canon of Lisburn Cathedral on Tuesday December 4 by the Dean of Connor, the Very Rev Sam Wright.

The new Canon, who is rector of Ballymena (Kilconriola) and Ballyclug was installed as the Prebend of Kilroot, Chapter of St Saviour.

Mark has been rector of Ballymena since June 2016. He said he was very honoured to have been appointed a Canon by the Bishop of Connor, the Rt Rev Alan Abernethy.

“It is recognition that I have been in ministry for more than 30 years, and is also a great encouragement for me,” Mark said.

Mark is a former pupil of Lisnagarvey School for Boys and Lisburn Technical College. After A Levels he joined the Northern Ireland Civil Service where he worked for more than seven years. 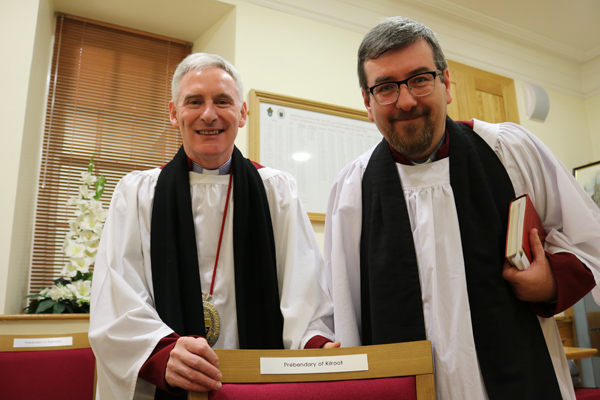 Dean Sam Wright introduces Canon Mark McConnell to his new seat as Prebend of Kilroot in the Chapter of St Saviour, Lisburn Cathedral.

In his mid-20s, Mark moved to study at Oakhill College in north London, where he felt the call to ordination. He was accepted for training by St Alban’s Diocese and after graduation did a familiarisation year at St James’ Parish, Muswell Hill, north London.

During that year he married Cherith, a native of Omagh and a primary school teacher. Mark was ordained in St Alban’s Diocese and served his first curacy in Christ Church, Bedford.

He and Cherith returned to Northern Ireland, where Mark did a second curacy in Bangor Parish, Diocese of Down and Dromore. He was later appointed rector of Killyleagh in Co Down, and after seven years moved to Connor Diocese as rector of Ballyclare. He remained in Ballyclare for more than 18 years before the move to Ballymena.

Mark and Cherith have three children, Daniel, Matthew and Erin.

Preacher at the service on Tuesday evening was the Ven Paul Dundas, Archdeacon of Dalriada and rector of Christ Church, Lisburn.