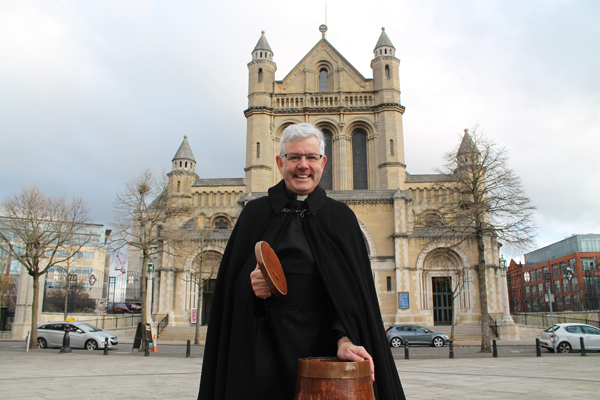 Dean Stephen Forde is preparing for his first Black Santa Sit-out which begins on December 17.

Black Santa will take up his post on the steps of Belfast Cathedral on Monday December 17 for the 42nd annual Sit-out for charities.

This is Dean Stephen Forde’s first Christmas as Black Santa, and he is looking forward to greeting people outside St Anne’s each day come rain or shine.

Funds raised on the steps of the Cathedral aid the vital work of more than 200 local charities who offer support and opportunities to those in need in our community.

The Black Santa tradition was established in 1976 by Dean Sammy Crooks who stood outside the Cathedral in the days before Christmas urging people to ‘give and let live’ to support the sick, hungry and poor. 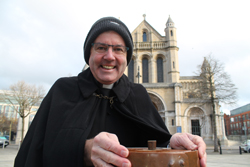 Dean Sammy’s distinctive black Anglican clerical cloak quickly earned him the nickname Black Santa, and a tradition which has lasted more than four decades was established.

The Christmas Sit-out was continued by Dean Jack Shearer, Dean Houston McKelvey and Dean John Mann, and the current Dean of Belfast will assume the mantle this year.

Urging people to contribute whatever they can to the 2018 Appeal, Dean Forde said: “I know that the people of Belfast and far beyond see making a gift to Black Santa as a special part of preparing for Christmas.

“Over the past 42 years, parents and children, work colleagues and passers-by, people of faith and people of goodwill have reached into their pockets to place their pennies and their pounds into the famous wooden barrel. Because Christmas is not about what we get for ourselves, it is at heart about what we give and what is given.”

Funds raised through the Black Santa Sit-Out are distributed to local charities and organisations, with a small portion going to charities working overseas among those who have little food and few prospects.

The 2018 Sit-out gets underway at 8.45am on Monday December 17 and continues until Christmas Eve, with the exception of December 23 when the Dean will be busy with the Cathedral services, including the popular Carols and Lessons for the City at 3.30pm.

The Dean will be supported on the steps by the Canons of the Cathedral, the Bishop of Down and Dromore, and the Bishop of Connor’s commissary, each dressed in the distinctive cloak of Belfast’s Black Santa.

Dean Forde said this will be a Christmas which will challenge many in the city of Belfast, and urged anyone who can’t get to the Cathedral to make their donation, however small or large, by cheque or cash, by BACS or online at www.belfastcathedral.org.

“However you donate, whatever you give, know that your gift changes things for hundreds of charities and organisations who will receive from your generosity, and for the thousands of people they can support and help,” Dean Forde said. “So please call by, say hello and share the gift of giving this Christmas time.”